Volleyball in a hijab: Does this picture show a culture clash? 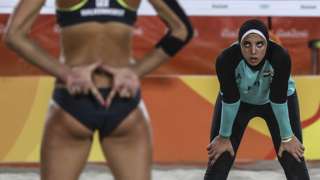 The pictures of Egypt's women's beach volleyball team playing Germany swept the internet yesterday, but while some people focused on what divided the players, others focused on what united them.

"Hijab vs bikini thing aside, how much of a 'culture clash' is it really if you are both playing women's beach volleyball at the Olympics?" tweeted columnist Ben Machell .

CNN's Bill Weir described it on Twitter as an Olympic Rorschach test , asking: "Do you see a culture clash? Or the unifying power of sport?"

A "culture clash" is defined in the Oxford dictionaries as "conflict or discord resulting from the interaction of (two) different cultures".

There was none of this on display on the Copacabana beach, though the reaction on social media might be described as "culture shock" - "the feeling of disorientation experienced by someone when they are suddenly subjected to an unfamiliar culture, way of life, or set of attitudes".

) or a one-piece swimming costume - a rule which some regarded as a transparent attempt to make the sport sexy.

The Australian Sports Commission complained that the International Volleyball Federation (FIVB), the sport's governing body, had "introduced uniforms intentionally to focus attention on the athletes' bodies rather than for any technological, practical or performance-enhancing reasons".

But since 2012 the rules have allowed women to wear shorts, long-sleeve shirts and body suits. British weather drove the Brazilian team, among others, to take up the full body-cover option.

Egypt's Doaa Elghobashy, however, is the first Olympian beach volleyball player to wear a hijab as well though, thanks to a last-minute concession from the FIVB just in time for the Rio Olympics.

"I have worn the hijab for 10 years," Elghobashy said. "It doesn't keep me away from the things I love to do, and beach volleyball is one of them."

Two tweets, among others, stirred a furious debate.

tweeted the picture with the caption "What's wrong with this picture? (Hint: nothing)". Plenty of people replied to say they disagreed.

Ian Bremmer of the Eurasia Foundation, meanwhile, asked which of the athletes were dressing closer to how they would actually prefer to dress, adding "Not obvious".

The men's volleyball outfit, by the way, falls somewhere in between the bodysuit and the bikini - it's a singlet with shorts.

And often the players cover their heads.