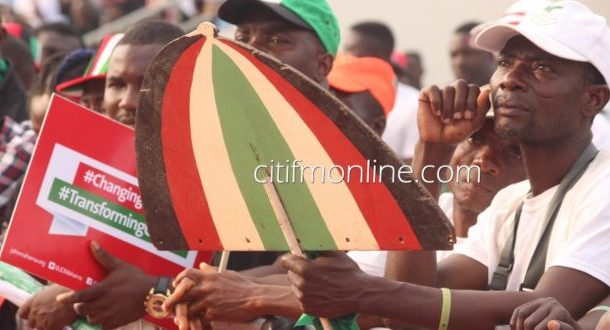 “We wish to draw the attention of the stakeholders of the great NDC to our decision to abstain ourselves from the said functions with immediate effect,” a statement signed by 11 executives of the NDC in the region stated.

This, they say is because the party’s regional secretary and the chairman had “decided to exclude the Regional treasurer, the two vice Chairmen and all deputies from all committees relating to the 2016 campaign in response to apparent calls for accountability on how logistics and resources received by the region in the past were disbursed and used.”

“The party was hoping to launch its campaign on Sunday, September 4, 2016 where it was to name a number of NDC members to facilitate the party’s campaign in the region,” they added.

The party after its national campaign launch, is launching regional campaign task-forces in the various regions to carry out an effective campaign that will secure them a one-touch victory in the December polls.

BOYCOTT OF INTENDED LAUNCHING OF VOLTA REGIONAL NDC CAMPAIGN TASKFORCE AND OTHER ACTIVITIES
……………………………………
The attention of we, the undersigned members of the NDC Volta Regional Executive Committee (REC) has been drawn to an intended launch of a so-called Regional Campaign Task Force and the opening of the new Regional NDC office through a message circulated by the Regional Secretary, Mr Simon Amegashie Viglo on many social media platforms.
We wish to draw the attention of the stakeholders of the great NDC to our decision to abstain ourselves from the said functions with immediate effect.

We also demand as a matter of urgency,the need to convene an emergency regional executive Committee meeting to correct the following anomalies:-

The campaign task force was constituted without the knowledge and approval of the functional executive committee (FEC) of the party in the region!

That, the regional secretary and chairman have decided to exclude the Regional treasure, the two vice Chairmen and all deputies from all committees relating to the 2016 campaign in response to an apparent calls for accountability on how logistics and resources received by the region in the past were disbursed and used!

The so-called taskforce which is purported to be coming from the region in consultation with national Executives was itself questioned by the national campaign coordinator/national organizer as to why certain names were included and directed that certain corrections be made!

Our region has a convention of wider consultation on issues of this nature with all stakeholders, but in this special and important exercise, such conventions were ignored, and it appears some few executives notably the Chairman and Regional Secretary have chosen to run the activities of the party in isolation as they have been doing for a while now!

Recently, a meeting was convened and members of the executive Committee were made to believe that the speaker of Parliament ,Captain Kojo Tsikata and others were planning to hijack the work of the regional executives and that we should rise against their intended formation of campaign oversight Committee.

Little did we know that it was a clear mastermind of the regional secretary and chairman to create a dilemma of dividing the entire region which will allow them room to dictate the pace and to Continue to misappropriate party funds and logistics with impunity!

Our MDCE’s boycotted our last REC meeting because the Regional minister was not included in the taskforce leading to bad-blood between the few Regional executives and MDCE’s. Why?

The intended launching lacks strategy and focus politically which will undoubtedly have effect on the unity of the region going into this critical elections.

Central region has shown a very good lead worthy of emulating by other regions .We are therefore questioning the intention behind the rush and the opaque leadership exhibited by the duo!

We also need an explanation why all elected deputy position holders in the FEC were excluded in all committees without any information or explanation or whatsoever.

We wish to know also why they maintained the old security committee of the Region but formed new Communication & logistics committee and placed themselves on all ?

Is it because they wouldn’t benefit anything from security as compared to the communication and logistics committee ??

We feel that the posture of the regional chairman and secretary is clearly unhealthy for the unity of the party at this critical hour.

The regional chairman has clearly demonstrated his unwillingness to work with a collective voice as he runs the party administration from his private residence like a GPRTU franchise!

He was not able to offer explanation on how he spent monies and logistics he received on behalf of the region.

Procurement processes for the newly acquired and refurbished party office is not known to us.

Some of them allegedly awarded contracts to their wives to procure items for the building; Clear case of conflict of interest and abuse of office!

On this basis we are calling on all major stakeholders including MDCEs, General members and executives at National, Regional, Constituency and Branch levels of our party to ignore the invitation to such a program until such a time that all critical issues raised are resolved and the party properly re-strategized for the campaign towards victory 2016.

We refuse to be in the boat and sink with them!

We will all resign en-block to pave way for the few to lead the region should our calls and demands be ignored!

We have all been duly elected and we owe it to the region, a duty of accountability and responsible leadership!