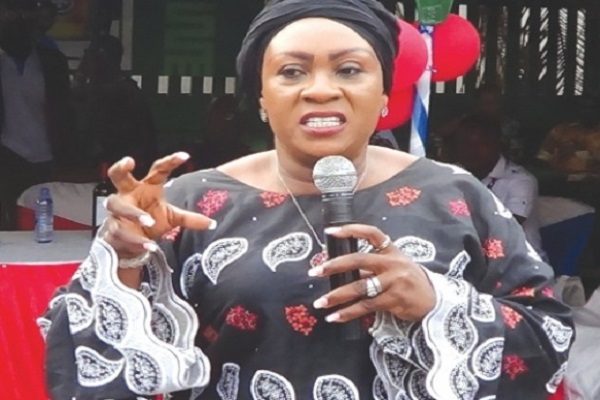 There appears to be strikingly different accounts from the Electoral Commission and the Minister for Special Initiatives, Mavis Hawa Koomson on the violence that marred a registration exercise at a polling station in the Awutu Senya East constituency.

Registrants and security personnel had to run for their lives after gun shots were fired indiscriminately at the centre.

The ensuing chaos disrupted the exercise and ignited calls for punitive punishment for the culprits.

A viral video from the scene captured Hawa Koomson in a heated verbal exchange with another woman, suspected to be a member of the National Democratic Congress.

In an attempt to discover the genesis of the mayhem, Accra-based Adom FM spoke to Hawa Koomson who shockingly confessed to being the person behind the gun shots.

Koomson who is the Member of Parliament said she did that in self-defense as a group of supposed NDC supporters were charging towards her.

She further claimed she was without her security escort and hence had to defend herself.

“None of my men had guns on them when we got to the centre. I fired the shots myself,” the MP, told Adom FM.

“I’m a Member of Parliament, I need to protect myself. It was at dawn; my police escort had not started work yet. So that is a mechanism I have adopted in his absence,” she said.

But a statement from the EC condemning the violence appears to contradict the Minister’s account.

According to the EC contrary to Hawa Koomson’s claims that she fired the shots, the gunshots were from some ‘unidentified gunmen.”

The EC said it has noted “with concern” some acts of violence at some registration centres across the country “in the form of physical and verbal attacks on its officials. The violence “is perpetuated by political party supporters and sympathizers”.

“One of such incidents occurred today [Monday] at the Step to Christ voter registration centre in the Awutu Senya East Constituency in the Central Region where unidentifiable gunmen attacked officials at the centre and disrupted the process by firing gun shots”, the statement said.

Meanwhile pressure is mounting on President Akufo-Addo to add Hawa Koomson to a list of appointees who have been axed from his government.

Founder of IMANI Africa, Franklyn Cudjoe has also charged the president to either fire her or forget about their ‘friendship’.

Security Analyst Adam Bonaa could not fathom how and why a public figure will put up such behaviour in the full glare of the public.