War awaits as US warns Russia: 'Hit us one more time and we WILL hit back' 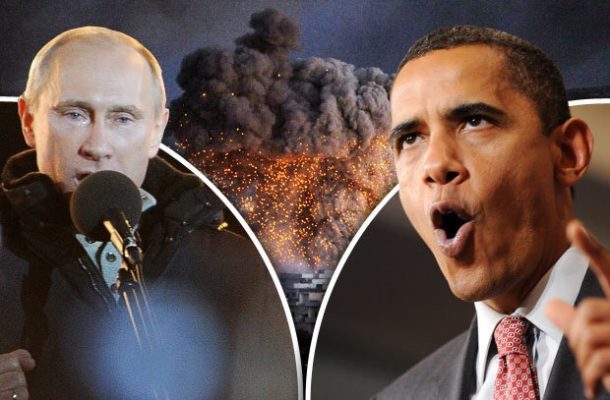 FIGHTING TALK: Russia has been warned that America will defend itself against further mistakes. Lt Gen Stephen Townsend, who took command this week, hit out at Moscow after a close call on Thursday.

Bashar al-Assad, the murderous Syrian dictator and key Kremlin ally, bombed an area near where US forces were operating.

Several American troops had to be evacuated and now Washington has stepped up jet patrols in northern Syria to stop it happening again.
BUTCHER: Bashar al-Assad has ordered the recent attacks on Aleppo, left
“I want them dead or on the run in a some hole”
Lt Gen Stephen Townsend
Only a few weeks ago, Russia also bombed a British base in southern Syria, directly defying warnings not to attack.

"And I'd just say that we will defend ourselves if we feel threatened," he said from his Baghdad base.

He has also set himself the goal of destroying the self-proclaimed ISIS caliphate within a year.

Air strikes in Syria leave behind devastating consequences in the war against Daesh militants.

This means, in his own mind, booting it out of the cities and ending its control over populated areas.

"I want them dead or on the run in a hole somewhere in the desert, and significantly less of a threat," he said.

ISIS leader Abu Bakr al-Baghdadi, who was previously rumoured to have been killed, is still in control, according to Townsend.

But the jihadi boss and his cronies are being "actively hunted" he said, and could be pinned down in Raqqa, Syria, by US-trained troops within weeks.