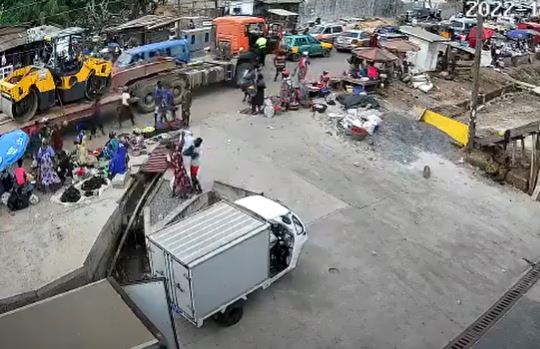 A CCTV footage has been shared, showing the immediate events leading to the ghastly accident recorded recently at Bogoso in the Western Region.

The accident, which occurred on Saturday, November 19, 2022, led to the death of one person and injuries to several others.

Details from the CCTV footage, which has now gone viral on social media, put the time of the incident at 12:55 p.m. on Saturday.

The video shows a busy street within the township of Bogoso with several cars, including an articulator truck carrying a bulldozer, parked in the road.

A sudden rush by several people on the streets is followed by a truck carrying three logs of heavy timber falling backwards in an uncontrolled manner.

“The Rescuers notwithstanding the chaotic accident scene extricated and evacuated the trapped person with various degrees of injuries in the Toyota Corolla car and sent him to the Effia Nkwanta Regional Hospital for further medical treatment via an ambulance while the other trapped lifeless body in the crashed Mazda Demio Taxi car was also extricated, retrieved and transported in a NADMO pick up vehicle to the hospital morgue for preservation and further investigation. The extrication was completed within an hour at the accident scene at 1430 hours.

“The fallen timber logs caused extensive damage to three (3) vehicles (Toyota Corolla, Nissan Versa Taxi and Mazda Taxi), a tricycle, and foodstuffs. The fallen logs killed one person on the spot and injured one other person who is responding to medical treatment at Effia Nkwanta Hospital,” the Ghana National Fire Service, which responded to the scene of the accident, said in a report.

According to the GNFS, the driver of the truck lost control while negotiating a curve, leading to the accident.

Meanwhile, the driver of the timber truck is said to have been arrested and is currently in police custody assisting in investigations.
Source: Ghanaweb