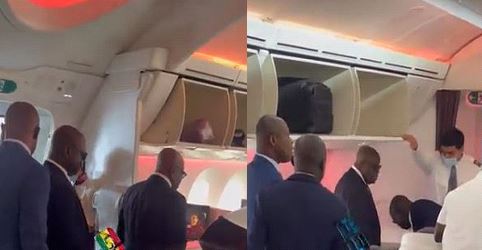 The president, according to reports, is flying to Qatar to throw his weight behind Ghana’s Black Stars who are opening their third World Cup appearance campaign against Portugal on Thursday.

A video shared by GhHper on social media shows the moment President Akufo-Addo entered a commercial flight for his journey to Qatar, where the World Cup is being held.

The President is also seen exchanging pleasantries with some enthusiastic Ghanaians who were on board the flight.

It is reported that the president will interact with the Black Stars to motivate the team before their opening match.

Ghana is placed in Group H, paired with South Korea, Uruguay and Portugal.

The Black Stars, led by Otto Addo as head coach and Dede Ayew as captain, is seeking to qualify from a tight group for the nation’s third appearance at the Mundial.