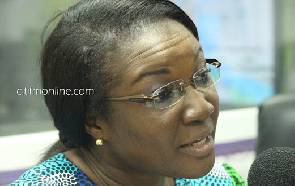 The Campaign Spokesperson for the governing National Democratic Congress (NDC) says party’s 2016 campaign which takes place at the Cape Coast Sports Stadium in the Central Region aims at endearing President John Mahama to the good people of Ghana.

Joyce Bawa Mogtari says the programme would be used to market the “all-inspiring attributes” of Ghana’s President and NDC Presidential Candidate.

“I am expecting an energizing people who are poised for action and I can see that in the crowd. We are going to be looking at importing largely President Mahama’s achievement to the people of Ghana,” she told Joy News’ Raymond Acquah barely minutes for the programme to kickstart.

Since the President commissioned the ultra-modern Sports Complex in the heart of the Central Region, Cape Coast, the NDC campaign launch will be the first political programme to be held in there.

The launch will herald the official campaign activities of the NDC which is bent on clinching a second term for its Presidential Candidate.
Already President Mahama has undertaken an “Accounting to the people” tour of the ten regions of the country.

He used the opportunity, which has largely being criticised by the New Patriotic Party (NPP) as a campaign in disguise, to commission many government projects such as nine out of the 200 Day Senior High Schools and at least 11 water projects.

Even though the President has engaged in several activities ahead of the 2016 election, Mrs Mogtari says the campaign launch is the greatest of all.
She says the programme will draw representatives from the ten regions of Ghana, including Members of Parliament (MPs), regional ministers, Ministers of state and party executives.

“We are going to have a balanced speech from Madam Faustina Nelson (a former National Vice Chairperson of the NDC), the Education Minister, Jane Naana Opoku Agyeman and the Health Minister, Alex Segbefia with a groundbreaking speech from President Mahama,” she said.