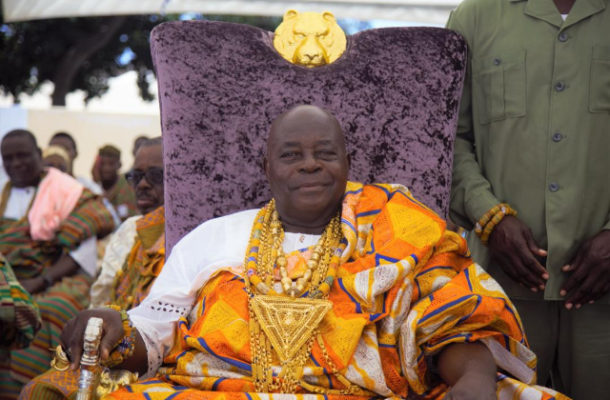 President Nana Addo Dankwa Akufo-Addo has revealed that the peaceful resolution of the Dagbon conflict by his royal majesty Otumfour Osei Tutu II and other eminent chiefs led to the government's decision to appoint the Awomefia of the Anlo state, Togbe Sri III as the sole mediator of the Bimbilla conflict.

Speaking after a meeting with the chiefs and traditional leaders of the Dodze traditional council, the President emphasized that the choice of Togbe Sri III was a strategic decision.

The first gentleman cited the way and manner which the long standing Dagbon conflict was peacefully mediated by the Asantehene and other eminent chiefs as being the motivation behind Togbe Sri's appointment.

The decision over the legitimate chief of Bimbilla has been in dispute for many years.

The issue was put before the National House of Chiefs for arbitration.

The verdict of the chiefs was subsequently affirmed by the Supreme Court in 2018, declaring Naa Andani II as the legitimate chief of the area but this ruling has since hit a snag.

However, to resolve this dispute, President Nana Akufo-Addo announced that the Ministry of Chieftaincy and Religious Affairs in consultation with the ministry of national security have proposed customary mediators to resolve the chieftaincy issues.

This subsequently led to the appointment of Awoamefia of Anlo State, Togbe Sri III to lead the mediation process to help resolve the long-standing chieftaincy conflict in Nanum.