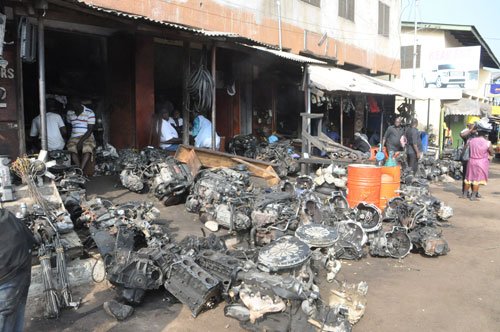 Ahead of a 2019 budget presentation that promises hope, spare parts dealers at Abbosey Okai in Accra say, they have run out of it.

“We don’t care what will be read in the budget because politicians keep lying to us,” some spare parts dealers told the Ghanaian Times Wednesday as Finance Minister, Ken Ofori-Atta goes to Parliament Thursday.

The Spare parts dealers say rising cost of business has triggered diminishing returns in their love for President Nana Akufo-Addo.

It has taken barely 14 months for cracks to develop over a political relationship with the spare parts dealers that served the New Patriotic Party well during the 2016 general elections.

Now in power, the NPP government’s relationship with the dealers is getting complicated.

A shop owner told Joy News in July 2018, he now pays ¢7,500 on import duty when he used to pay ¢5,000. This is despite government slashing import duties on spare parts.

The increase in cost of clearing goods at the ports despite a reduction in duties, has been explained by government as the result of new measures introduced by the Ghana Revenue Authority.

The GRA has introduced a new system that values spare parts and calculates the cost of clearing them.

It is the new benchmark that has seen the cost of spare parts go up, which government has explained to mean that businesses are now paying the true cost of goods they import.

But spare parts dealers say, their trust in government has been shaken.

“We just pray that to God to keep our business running and take care of our families because if we rely on what they [politicians] tell us, we would have committed suicide,” a trader who gave his name as Prince lamented.