We must keep the momentum - Andre Ayew 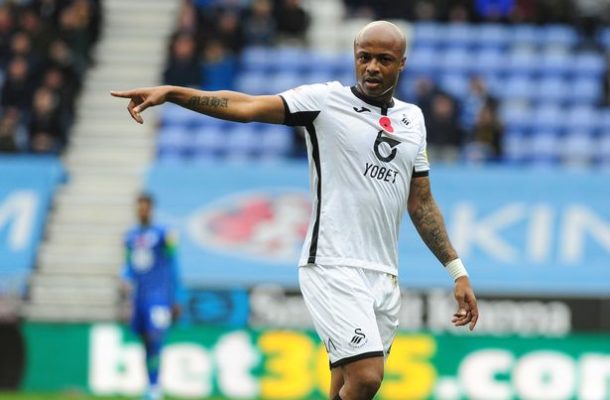 Andre Ayew climb from the bench as he inspired Swansea to a 2-2 drawn game as he scored and was heavily involved in the first goal.

Swansea City clinched a Championship play-off spot in dramatic style as they earned a 2-2 draw with Reading at the Madejski Stadium.

“I am very happy we are in the play-offs. That was the objective at the start of the season, and we need to keep going and get ready for the play-offs,” said Ayew, as reported by his club’s official website.

“There is a chance to build momentum and finish higher in the table. We will keep going.

“It’s great to be in the play-offs a few weeks before because we can really get ready for what’s coming. We need to use that to our advantage.”

Ayew marked an injury return for Swansea on Sunday as a second-half substitute. His presence was immediately felt as his backheel pass sent Jay Fulton through en route to Jamal Lowe’s opener.

A few minutes later, the Ghanaian added his name to the score sheet, and the goal was his 16th of the season.

“Andre is a really good player and person, he thrives on being the big player and we are very happy to have him,” Swansea boss Steve Cooper said of Ayew, who completely sat out Tuesday’s 1-0 loss to Queens Park Rangers due to the injury picked up against Wycombe Wanderers two matchdays earlier.

“The team comes first, not himself, and you could see that today. It would have been great if we didn’t need him, as it would have meant we were comfortable in the game.

“But we did, he was medically cleared to play 30 minutes, and it ended up being a good move thanks to the good work from Andre and the medical team. It helped get the result we wanted.”

Ayew is currently Swansea’s top scorer of the season with 16 goals.