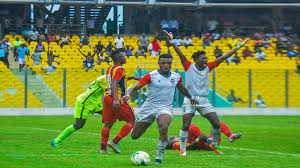 An Executive Council(EXCO) member of the Ghana Football Association(GFA), Dr Tony Aubynn says the vision of the GFA for the domestic league is to reach the heights of foreign leagues like the English Premier League(EPL) and La Liga.

He says the GFA is not satisfied with the level of the Ghana Premier League(GPL) currently but will strive to position the league to the lofty standards they are seeking.

"We are not overly satisfied with the league so far.We will continue to push to the level of the EPL and the La Liga,that is where we want the level to be."

The Medeama board chairman also says the GFA need to do a lot in improving crowd control while referees must be able to handle matches without any perceived prejudices or bias whiles our game must be played on good pitches.

"We should be able to control the crowd, referees must be able to handle the matches without any perceptible bias and we have to make sure games are played on good pitches."

Dr Aubynn added that there are plans to make the league autonomous of the GFA while the EXCO will not rest until they achieve the set goals for the GPL.

"We are working on making the league autonomous and improve the system of the league.

We are not ready to rest,we are not content as a council the rate of our league," he added.