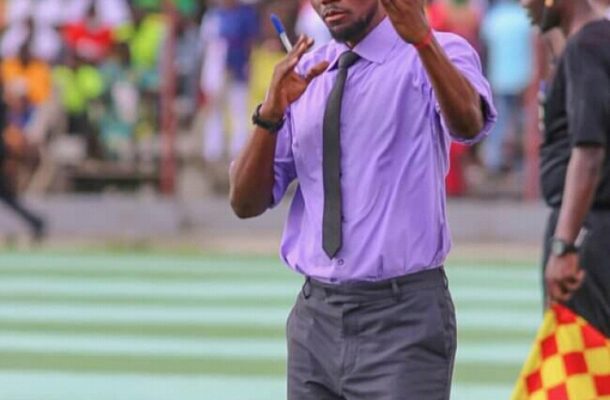 Head coach of Karela United Bismark Kobi Mensah says that his side were denied an obvious penalty when they played against Asante Kotoko at the CAM Park on Sunday.

Kumasi Asante Kotoko could not keep their 100% record intact as they dropped points against Karela United at the Anyinase Park thanks to the heroics of  their goalkeeper.

Goalkeeper Razak Abalora yet again delivered a superb display with some fantastic saves to deny Karela United as he pulled off a match winning save in the 85th minute to deny the home side victory.

Ten man Kotoko held on after midfielder Richard Boadu was shown a red card after a vicious foul in the second half.

Karela United were dominant and had numerous goal scoring opportunities but were thwarted by goalkeeper Razak Abalora and some good defending.

Speaking after the match the young gaffer asserted that they were denied a clear penalty and should have beaten Kotoko on the day.

"I'm very disappointed because is always painful if you dominate a game and you don't win. I told you Kotoko are beatable because I knew what I was talking about, I had watched them three times

"We know the quality we have and had the confidence we will beat them but is quiet unfortunate.

"We were denied a clear penalty. With Kotoko's red card, the player was already on yellow so I think is a clear red card."