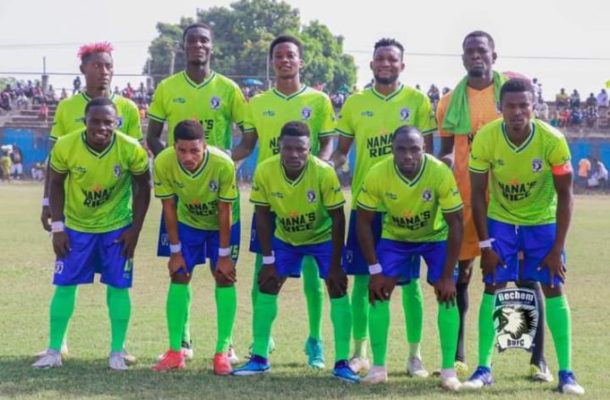 President and owner of Ghana Premier League side Bechem United, Kingsley Owusu Achiaw aka Agama says that his side will beat Hearts of Oak to lift the 2022 MTN FA Cup trophy on Sunday.

"My players are motivated ahead of the game. The people of Bechem will be at the stadium in their numbers to support the team so there is no way Hearts will win."

"The players will get the opportunity to have preseason in Europe as part of the motivation. For me, a win on Sunday is not negotiable. I am convinced we will beat Hearts 2-0." he told Asempa FM


Accra Hearts of Oak will play Bechem United in the MTN FA Cup finals on Sunday at the Baba Yara Sports Stadium in what will be the last game of the 2021/2022 season.

Bechem United lifted the trophy in 2016 when they defeated Okwahu United to win the trophy for the first time in their history and will be looking forward to a repeat of that feat.

Coach Samuel Boadu's side are the holders of the FA Cup and may want to retain the trophy which they have so much affinity for being the record winners.

Hearts will have to appease their fans with the MTN FA Cup as they have been very disappointing in the Ghana Premier League this season missing out on top four.

The final is scheduled for Sunday, June 26, 2022 at the Baba Yara Stadium.