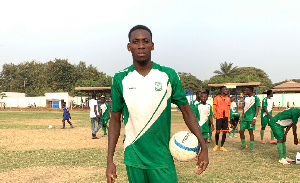 Kumasi Asante Kotoko have sold leading top scorer  Kwame Opoku to Algerian side USM Algiers for a handsome amount of money and have lined up Bofoakwa Tano striker Welbeck Appiah as his replacement.

The Porcupine warriors have made an approach to Bofoakwa Tano about the availability of the prolific striker but it may be pay back time for Bofoakwa Tano to exact revenge on the Ghana Premier League giants.

“We are not going to sale our striker to Asante Kotoko. Kotoko has decided to sell Kwame Poku which they have raked a lot of money and they have approached us with something small for ours”. He told Happy FM.

“We have received letters from other teams but we want to stay focus and qualify for the Premier League.

According the board chairman of the Division One club, Mr Yaw Boatneg Gyan, they will not sell their prized asset to Asante Kotoko because they acted in bad faith when they asked for their young player Andrews Appau to be loaned back to them after they sold him to them.

He says Andrews Appau was clear not getting playing time and so they wanted him to help them in their push for qualification into the Premier League but Kotoko declined their request.

“What is worrying that we sold our defender Andrew Appau to Kotoko and requested that they should loan him to us they said no even though the player was not getting playtime."

“They expect us to sell our player to them. We will never do any business with them."

The former Black Stars Management Committee Chairman says there are a lot of clubs who have expressed interest in their player but they will not do business with Asante Kotoko in particular.

Takyi has been handed a call by the Black Stars after his goal glut scoring nine goals in the division one while providing three assists.