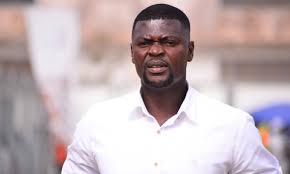 Dreams FC recorded their first ever home triumph over Accra Hearts of Oak since gaining promotion into the Ghana Premier League on Sunday.

The Dawu based side beat Accra Hearts of by 2-0 with goals from Ali Huzaif and Sylvester Simba condemned the phobians to defeat.

Both sides went into the break with the scores at 0-0 but a monumental error on the part of Nuru Sulley with a careless red card gave the host the lead before a late strike made it 2-0.

According to coach Boadu, the red card was pivotal in their loss but they are going back home to correct the mistakes against Dreams FC who he admits played very well

“We have to take it like that, there are three things in football, it’s either you win, lose or draw,” he said in the post-match interview.

“We are going back home to correct the mistake we made in conceding these goals,” he added.

“We were playing well but unfortunately we had a red card and it also affected us in our play. Our transition and everything change.

The last goal was very bad but I am not disappointed. They did well, play to satisfaction but missed chances, unfortunately,” Boadu concluded.