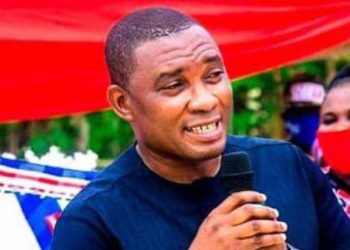 The Ministry of Lands and Natural Resources says it is implementing a sustainable mining model to address protracted mining threats and make Ghana an enviable mining hub in Africa.

Ghana’s mining industry has over the years been bedevilled with illegal mining, irregularities, and the use of mercury for mining gold, resulting in water bodies’ destruction and health-related diseases in mining communities.

Speaking at the inauguration of District and Municipal community mining committees for the Northern belt in Bolgatanga, Deputy Minister of Lands and Natural Resources, Goerge Mireku Duker, explained various initiatives the ministry is executing to have a responsible mining regime.

Mr. Duker hinted that, as part of measures to regularize the mining sector, all earth-moving machines like excavators will be tracked with tracking systems to operate within concessions and risk being de-activated and penalized for operating beyond their confines.


“The wanton destruction of our water bodies is a worrying situation and we have procured boats and will engage trained river wardens who will be patrolling along the river banks continuously to ensure maximum protection of river bodies. Another regularization measure is to have a QR code principle of the signpost at all concessions to eliminate the paperless system and for easy identification of legal concessions.”

Mr. Duker also announced the acquisition of mercury-free machines, which will soon be distributed to mining firms to reduce the negative impact of mining with mercury.

“We have gotten to a regime where we could extract gold without the use of mercury as the mercury-free technology guarantees about 90% of the threshold out of the ore compared to 45% with the use of mercury. We have procured 100 of these machines and some have been sent to Bongo and Tinga in the Upper East and West Regions”.

He reiterated the ministry’s commitment to eradicating gold smuggling through Precious Minerals Marketing Company (PMMC) and also reducing withholding tax to 1.5% to help address the menace.

Mr. Duker, further hinted that mining concessions must now have functional offices, a first aid center, changing rooms, and be serene enough to be approved for mining operations.

He tasked the various mining committees to work in synergy to attack the menace of illegal and irresponsible mining.

Speaking on behalf of the 15 District and Municipal mining committees, District Chief Executive for West Mamprusi, Issahaku Aremeyaw Somo, assured us that, the committees will do their best to support government’s agenda toward sustainable gold mining.