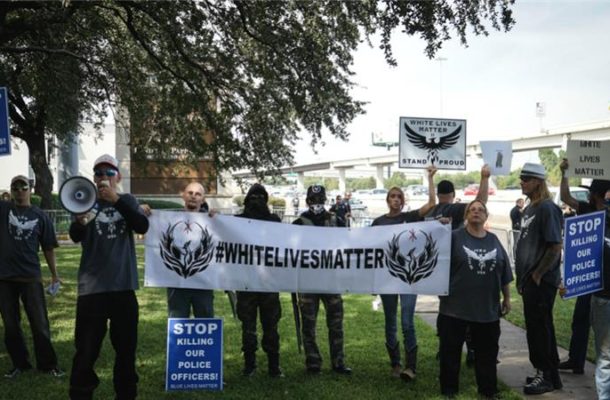 A masked woman in army fatigues and a military grade vest walked to the front of a small group of protesters, an assault rifle draped from her left shoulder and swinging lightly by her side.

A thin man, also masked, sauntered up next to her. On his hip was a knife fastened to his belt loop. His sweatshirt read "anti-Antifa", a reference to the anti-fascist movement in North America and Europe.

Behind them, fellow protesters raised a banner that read in large script: #WhiteLivesMatter. On each end sat a large eagle with crossbars and a lightning bolt, the symbol of the Aryan Renaissance Society white supremacist group.

The participants in Saturday's demonstration - numbering between 15 and 25 - are part of the White Lives Matter movement, which was recently designated by the Southern Poverty Law Centre as a hate group.

The movement has gained steam in recent months on social media, arguing that white Americans are enduring "genocide" at the hands of immigrants and interracial marriage, among other factors.


"White lives matter," Ken Reed, a protester, bellowed through a megaphone. He was wearing a hat with the slogan used by Republican presidential nominee Donald Trump: Make America Great Again.

The demonstrators gathered outside the Houston office of the Anti-Defamation League, a US-based Jewish organisation, and distributed fliers with anti-Semitic propaganda that derided "how the Jewish power structure" controls the US government and economy.

With hundreds of heavily armed police officers on site, around 60 counter-protesters had assembled across from the White Lives Matter group. Among them were local Black Lives Matter organisers, Dallas Antifa, Latinos Inmigrantes Triunfadores (Triumphant Latino Immigrants) and other groups.


Ashton P Woods, a 31-year-old organiser for the local Black Lives Matter movement, was among the counter-protesters.


Asked what he thinks motivates white supremacist groups, Woods said: "I see it as white fragility. I see it as them not being used to black and brown people standing up and saying, 'no, you're wrong'."

White Lives Matter was born in response to the growing protests decrying the often fatal police violence against black people across the country.

Though African Americans constitute roughly 13 percent of the country's total population, they make up more than 24 percent of the 807 people killed by police so far in 2016, according to The Guardian's The Counted database.

'Seeking to become a national movement'


Mark Potok, a senior fellow at the Southern Poverty Law Centre (SPLC), a civil rights group, told Al Jazeera that White Lives Matter is part of a growing number of white supremacist organisations sprouting up in the US.

"This isn't just a group that's a little bit racist," Potok said. "They are neo-Nazis seeking to become a national movement."

According to the SPLC, White Lives Matter is affiliated with the Aryan Renaissance Society, a Texas-based group that describes itself as a "network of dedicated white separatists diligently striving to impart a New Racial Consciousness to Aryankind".

Potok argued that White Lives Matter is gaining ground with the help of xenophobic rhetoric by anti-immigration politicians such as Trump.

David Duke, the infamous former leader of the Ku Klux Klan (KKK), has endorsed Trump, as has the National Policy Institute, a white nationalist think-tank.

"I think Trump has been dog-whistling these people since the first day of his campaign," Potok said.

"His disavowals [of their endorsements] have been as weak as humanly possible and are meant to tell white supremacists they are not his enemy."

Commenting on the threat groups like White Lives Matter pose, Potok said: "These are people who routinely speak about black people in the vilest terms imaginable, see Jews as undermining Western civilisation and see America as on the precipice. And they like to carry large weapons. Is there a danger? Yes, I think there's a danger."


In August, White Lives Matter members surrounded the National Association for the Advancement of Colored People office in Houston, where they protested with guns and confederate battle flags.

Last week, a man wearing a Nazi military uniform opened fire on civilians in a Houston shopping centre, injuring nine before he was shot dead by police.

Standing behind a police barrier at the Houston protest on Saturday, several White Lives Matter demonstrators chanted racist taunts directed towards the counter-demonstrators.

"How many of y'all have jobs other than the white ones?" one man in cowboy hat yelled repeatedly.

White Lives Matter protester Scott Lacy, who has been identified by Texas media as a member of the Aryan Renaissance Society, said his group has no interest in violence.

Lacy, with tattoos on his skull and arms, also rejected the designation of White Lives Matter as a hate group.

He claimed that being "pro-white" gets interpreted as being "haters", "racists" and "terrorists".

"They don't care why we're here," he said, referring to the counter-protesters. "They're just out here being anti-white."

Lacy, who identified himself as a former convict, wore a blue version of the US flag, which has been used to demonstrate support for US police following the killing of five officers in Dallas and three in Baton Rouge earlier this year.

Both shootings were interpreted as retaliatory attacks in response to police killings of African Americans.

"The problem is [that] in their culture - black culture - they're raised to hate the cops and to hate whites period actually. But we're pro-police. They are heroes in our society," Lacy said.


Jennifer Jensen Wallach, a professor of African American history at the University of North Texas, said there is a long historical precedent in the US for white supremacist groups taking up the banner of supporting police.

"Lynching would have never taken place in the south if the law enforcement didn't want it to, if there wasn't direct or indirect support from law enforcement," she said of racist vigilante violence before and during the civil rights movement of the 1950s and 1960s.

While openly white-supremacist groups may be a fringe element in society, Wallach said their pro-police message carries serious implications.

"I think what's interesting is the people they manage to incorporate as allies, these Middle Americans who do not see themselves as 'Aryan Nation' but have exactly the same message."

'Afraid of the world'


At the counter-protest, a few dozen metres away from the White Lives Matter group, activists chanted "black lives matter" and blasted Spanish-language music to mock their opponents' anti-immigrant views.

"Hey hey, ho ho, neo-Nazis have got to go" also rang out through the speakers.

David Michael Smith of the Houston Socialist Movement, one of the groups that organised the counter-protest, said a growing number of activists in Texas are coming out against Islamophobic, anti-immigrant and racist groups.

"I think they [white supremacists] bring weapons to intimidate people first and foremost. I think they're also afraid of the world around them because they cannot understand society and the changes they are going through," Smith, a professor at a local university, said.

"It is absolutely essential for people of different political persuasions - workers, oppressed people, women, other folks - to unite and defeat the rise and return of the far-right," he added.

"And the fascists are not the only ones who are armed. We always rely on ourselves [for protection]."