Who is in charge of security, why have we not been able to stop galamsey?' – Asantehene 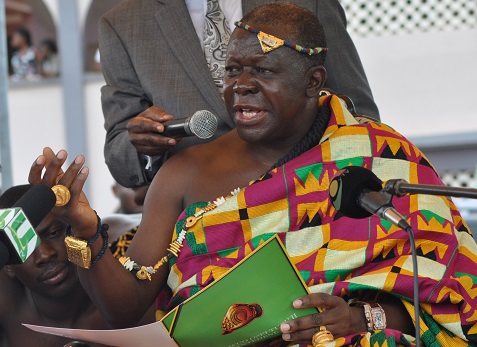 Asantehene Otumfuo Osei Tutu II has questioned why Ghana as a country has failed to stop the menace of illegal small-scale mining (‘galamsey’).

In an Opemsuo Radion interview monitored by GhanaWeb, Asantehene also questioned why the security apparatus in these 'galamsey' areas and the taskforce set up by the government have failed to stop the menace.

He intimated that small-scale mining was something that had been done for serval years but never to the detriment of the environment.

“When it comes to galamsey, that is an albatross on our head. It is rather unfortunate that it is happening this way.

“Ghana was known as the Gold Coast and therefore it was menial. But during that time, it wasn’t like the galamsey that we are talking about. Menial ones people were doing hundreds and hundreds of years ago, it was there.

“But unfortunately, it has gotten to a point where people are now using equipment and all that. They do not care about the environment.

Meanwhile, the Minister for Lands and Natural Resources, Samuel Abu Jinapor, has directed the Forestry Commission to cease the operations of Akonta Mining Company in the Tano Nimiri Forest Reserve of the Amenfi West Municipal Assembly.

According to a statement issued by the Public Affairs of the Ministry on Friday, September 30, 2022, the Company owned by the ruling NPP Chairman for Ashanti Region, Bernard Antwi Boasiako, alias Wontumi, has been engaging in mining activities in the forest without a permit.

“The attention of the Ministry of Lands and Natural Resources has been drawn to publications about certain operations by Akonta Mining Limited in the Tano Nimiri Forest Reserve in the Amenfi West Municipality in the Western Region.

Watch Otumfuo's interview in the video below: