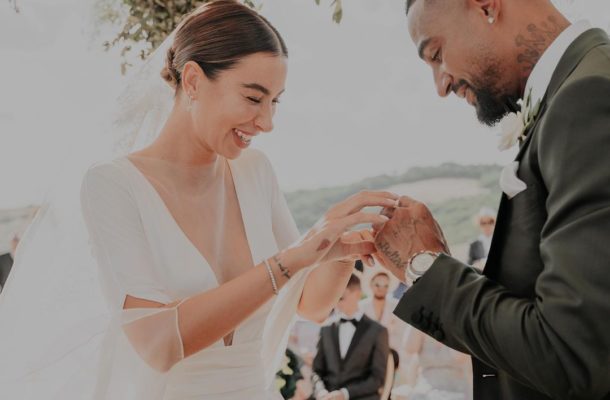 Kevin Prince Boateng said yes for the third time . The former Milan, Fiorentina and Monza footballer and currently at Hertha Berlin got married to Valentina Fradegrada, digital entrepreneur and influencer from Bergamo.

A double version of marriage: a "physical" one in Radicondoli, a village in the province of Siena that has less than a thousand inhabitants, and another virtual one in the Metaverse.

Where a group of people was able, upon payment of 50 euros for the entrance ticket, to attend the ceremony officiated by Enzo Miccio.

The wedding planner took care of the entire organization of the ceremony.

After his first wife Jennifer Michelle, to whom the footballer was linked from 2007 to 2011 and with whom he gave birth to Jermaine-Prince, and Melissa Satta, with whom he was from 2016 to 2020 and with whom he had Maddox Prince , here is the third wife of Kevin Prince Boateng.

Who is Valentina Fradegrada? The Bergamo and the Ghanaian footballer met in August 2021, theirs was a flash engagement that led, less than a year later, to the wedding. Valentina Fradegrada has origins from Bergamo and has been in the world of digital communication for over ten years: in 2009 she opened a fashion and lifestyle blog and then worked as a model in the United States. Once back in Italy, she graduated in Fashion Marketing. The two newlyweds have recently started an ambitious project: to launch their own wine brand .