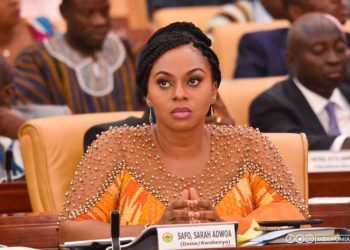 Parliament is struggling to declare the Dome-Kwabenya Constituency seat vacant because some members are guilty of absenting themselves in the future following the continuous absence of the embattled Member of Parliament for the area, Sarah Adwoa Safo.

These are the words of the Bono Regional Chairman of the New Patriotic Party, Kwame Baffoe, popularly known as Abronye DC.

He told Adom FM’s morning show Dwaso Nsem Wednesday that the issue has become a matter of concern and so it is important that “we allow the laws to work as it has gone through some processes in dealing with such issue.

“The Parliament House is struggling to pronounce the seat vacant because some of the MPs will be guilty of such same actions in future and so even if the matter comes back to parliament and they are to vote on it, a lot of them won’t as they may end up being in the same situation in the future,” he said.

To him, such issues are the reason why some laws need to be reviewed as the committee set up to look into the matter may even end up not taking a decision on the matter.

Speaker of Parliament, Alban Bagbin, deferred the decision on the fate of Sarah Adwoa Safo to the Privileges Committee for absenteeism.

This was after the House came to a dead-end on whether or not to declare the seat of madam Safo, Member of Parliament for Dome Kwabenya, vacant or not.

Mr Bagin, having earlier stated the importance of this decision by parliament, refrained from delivering a judgment on the matter.