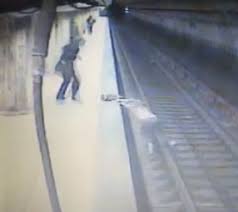 A disturbing video showing the moment a woman pushed another woman onto the path of an oncoming train, instantly killing her, has surfaced.

The incident reportedly occurred on December 12, 2017, in Bucharest Romania, and CCTV at the train station captured it.

According to reports, the killer is 36-year-old Serban Magdalena while her victim is a 25-year-old pregnant woman.

Some reports speculate the victim was a mistress to Seban's husband and Seban lured her to the train station under the guise of having a conversation but as a train came by, she pushed her onto the railway tracks.

In the video shared online, the victim can be seen trying to quickly get out of the tracks as the train approached but Serban kicked her back to the track and the train crushed her.

Serban reportedly has mental issues. She was arrested after a failed second attempt at pushing another person in another station.