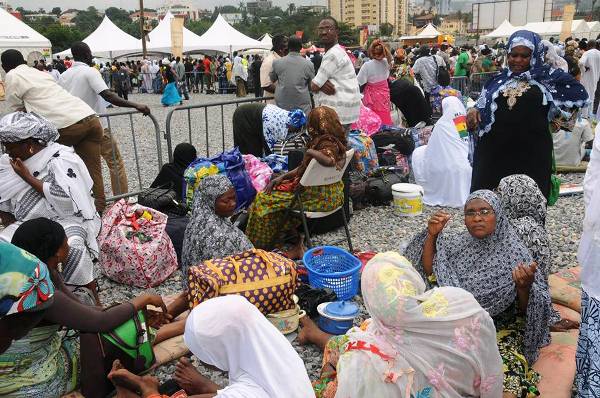 A woman died yesterday at the Hajj Village after a fall in the bath house where she had gone to wash up.

According to the Deputy Head of the Communications Bureau of the Pilgrims Affairs Office, Ghana (PAOG) Amin Lamptey, the woman had accompanied a pilgrim from Kumasi who fortunately was part of the passengers aboard the ninth batch of pilgrims to be airlifted to Madina.

A release he sent out yesterday read “the entire Hajj Village was in state of shock this morning when a woman by the name, Rukaiya from Kumasi New Town passed away when she was preparing to travel back to Kumasi after one of her relatives succeeded in travelling with the 9th flight which took off at 5:10am this morning (yesterday) and landed this afternoon (yesterday) in Madina.”

The deceased, he went on, visited the washroom to clean herself up for a possible journey back to Kumasi when she slipped and fell in the process. “She was pronounced dead by our Medical Officers on duty on their way to the hospital,” he said.
Some of her relatives who came along with her from Kumasi, he said “quickly conveyed the body to Kumasi for burial yesterday.”

In another development, the Chairman of the PAOG, Alhaji Tanko Abdul Rauf Ibrahim has confirmed to the DAILY GUIDE that nine underage persons have been deported from Saudi Arabia having traveled by one of the earlier flights.

It is being speculated that the teenagers were being sent to Saudi Arabia to stay on and join the teeming number of illegal immigrants in that country. The Saudi authorities knowing this trick appear to have mounted a special lookout for such persons and are quick to return them.

The many Ghanaian Muslim illegal immigrants live undignified life in shanty areas of Mecca. They are usually hunted by Saudi immigration officials. They are unable to access hospital facilities fearing they could be arrested and deported for not possessing stay papers.