We won’t vote for Mahama if … – Volta residents 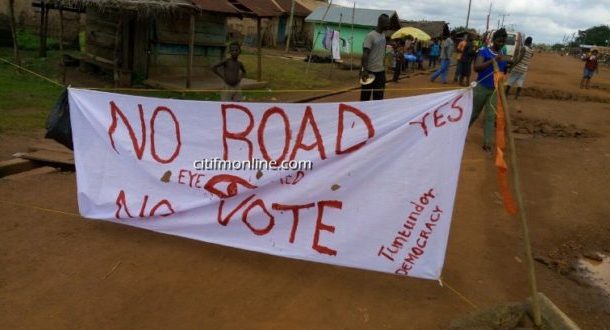 Some residents in Kpasa in the Nkwanta North Constituency in the Volta region are threatening to vote against President John Mahama if the governing National Democratic Congress (NDC) fails to construct some roads in the region.

The residents in the region say several attempts to get government to fix their roads have proved futile.

Speaking at a gathering of some chiefs and residents in the area ahead of President Mahama’s speech delivery, the paramount chief, Ubor Tasan Gonja VI therefore appealed to government to construct the roads. Ubor talked about the 25km Nkwanta -Kpasa road which is in a deplorable state adding that his subjects would vote massively for the President in the general elections if these promises are fulfilled. “We have a number of concerns we wish to lay before you. First and foremost, among them is the need for urgent action to be taken on the 25 kilometers Kpasa stretch on the Eastern corridor roads. This concern has become more alarming especially when Dedo Pepeso to Nkwanta stretch has been completed and the Daamongo to Bimbilla strech is also being worked on.” Earlier this year [2016] President Mahama in his State of the Nation Address claimed that some roads , including Hohoe roads in the Volta Region had been constructed.

Checks however revealed that the only roads in the Hohoe Township that had been given minor face-lift, were roads that were done four years ago.