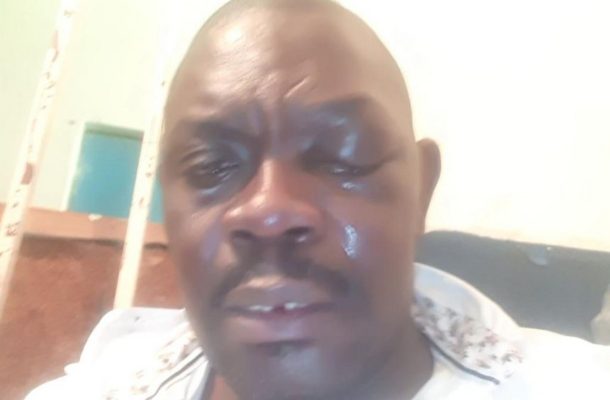 Shem Grant during an interview at the Nairobi Women's Hospital on Thursday, December 14, 2017.

A Ghanaian businessman in Kenya has been hopsitalised after he was brutalised by the Nirobi Police "without any offence".

In what seem to him like xenophobic attack,Shem Grant accused some police officers in Nairobi of illegally arresting and beating him up just because he is a foreigner.

He had denied any wrongdoing and has written to IPOA and to the Ombudsman in an attempt to get justice.

Speaking on his bed at the  Nairobi women's hospital,  he alleged that he was assaulted by the officers at his rented office in Parklands early last month, after his landlord, a senior government official, sent the officers to the premises on claims he defaulted on the Sh120,000 rent.

"I tried to inquire why I was being auctioned but I was never given a chance. The officers arrested me without any offence and locked me up at Kilimani police station," he said.

Grant told the Kenya's Star.com  that the official sent his son who they did account and found that he had no arrears except for December and January.

The case was filed at the rent tribunal where the magistrate gave an order that his property should not be auctioned until the case is heard and determined.

Grant stated that the official sent auctioneers together with police officers who ambushed him while having a meeting and started carting away his belongings.

At the station, he said, the officers stripped him half-naked and beat him up adding that he is yet to be told of the offence he had committed.

"I was helped by other suspects in the cell who dressed me up and helped me contact my friends," he added.

Grant added that he was escorted to Nairobi women's hospital where he was admitted for 17 days under tight security.

He said police told him that they will charge him with obstruction and assault.

His medical documents showed that he sustained injuries on his spinal cord, eyes, shoulder, and ribs.

Grant said he has tried to report the assault case but it has been impossible as the police are not willing to write a statement or give a p3 form to him.

The poor Ghanaian man is still battling for survival and cannot fathom why the police, who had acted on the of the landlord, would  want to frustrate his quest for justice.

"I am just a harmless businessman who has been here for 6 years and I don't understand why the police do not want to help me in getting justice," he said.