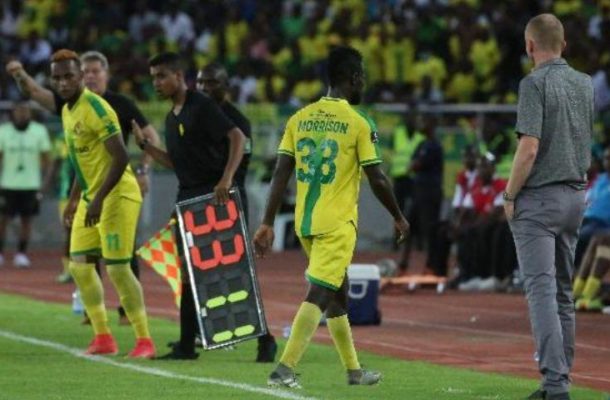 Ghanaian midfielder Bernard Morrison  has gone AWOL as his team Young Africans have not seen him at their training grounds just days after their humiliating 4-1 loss to fierce rivals Simba FC in the FA Cup game on Sunday.

The player was substituted midway through the second half of the game and instead of going to sit on the substitute's bench he walked down the tunnel despite several intervention from the 4th referee.

Morrison  has been in and out of the team since the top-flight resumed on June 13, played in the derby against the Wekundu wa Msimbazi but walked straight to the tunnel after being substituted in the second half for Patrick Sibomana.

Since the game, the player has failed to turn up for training scheduled for Monday and Tuesday causing anxiety within the Yanga ranks with club official threatening to take action against the player who has on countless ocassion being linked with sworn enemies Simba.

“As Yanga, we have set up a committee to discuss his conduct and we will come up with action any time soon,” Yanga Information Officer Antonio Nugaz told Goal.

On Tuesday, Yanga coach Luc Eymael confirmed to Goal only a few players turned out for training just a day after they suffered the humiliating 4-1 defeat against Simba in the FA Cup.

“A lot of players were not there on [Monday] for training, it is when you see the character when you are facing tough times, some players are there and some are not there but we will do with the players we have at hand,” Eymael told Goal.

“If people are not there perhaps they are thinking beyond the club, maybe their mind is not at the club and what can we do? We have to live with that and work with those players who are ready to play.”

Pressed further to name the players who skipped training and whether the club will take action against them, Eymael said: “I don’t want to comment on that…okay, thank you very much.”

“The issue with Morrison is now a complicated one, I don’t know is whereabouts same as the players who have shown up for training since the derby, I can only let the management to do their work and give us the way forward,” Eymael concluded.

Yanga are now fighting to finish second with close challengers Azam FC as they lie third on the log.