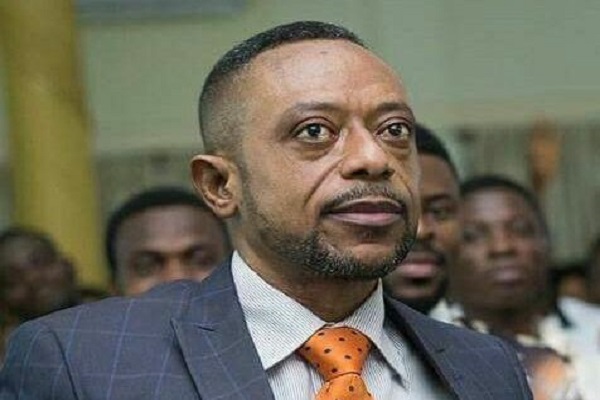 Founder and leader of Glorious Word Power Ministries International, Apostle Dr. Isaac Owusu Bempah has landed himself in fresh troubles after he disclosed that two of the Muslim youth, who attacked and vandalised his church early this year, have died mysteriously.

It will be recalled that some Muslim youth wielding machetes and other crude weapons, vandalised one of the branches of Owusu Bempah's church for prophesying that the National Chief Imam, Sheikh Nuhu Sharabutu, was going to die in 2019. The Muslim youth were captured on video defacing some billboards and posters belonging to the controversial pastor.

Speaking in a recent interview, Dr. Owusu Bempah claimed that two of the machete-wielding Muslim youth, who stormed the Odorkor branch of his church and vandalised the properties have died mysteriously.

Although he did not delve deep into circumstances that led to the death of those two boys, Reverend Bempah claimed that other collaborators who carried out the attack have channelled an unqualified apology to him through one of his best friends.

However, after Ghanaguardian.com published the story and subsequently shared on Facebook, Ghanaians who were not enthused with Rev. Owusu Bempah's remarks, shredded the prophet of God and slammed him with all manner of insults.

While some questioned his genuity in the prophetic business, others felt he was such a stupid man and a demon himself.

Some even challenged him to mention the names of the said two boys in question, if he was candid, sincere and truthful enough about his claims.

One Facebook user wrote: "Foolish man, if it was by your stupid occult spirit, why not all of them? If you believe those boys died through your stupid occult, then you are a fool and secondly, you are not a servant of God, stop tickling yourself before those Muslim boys start chasing you, the next time they will catch you, your death will be pronounced, foolish man"

The next user said, "Someone should advise this spiritual lunatic before he gets hurt, pls".

"U re very stupid man", said one man.

Another comment read: "It's never true... But now more attack is coming on u get prepared".

A lady posted: "Bullshit, how are your 33 parrots in your house? Be careful you are only dust and to it you shall return".

It goes on and on as some of the insults are screenshot and posted below for your perusal: 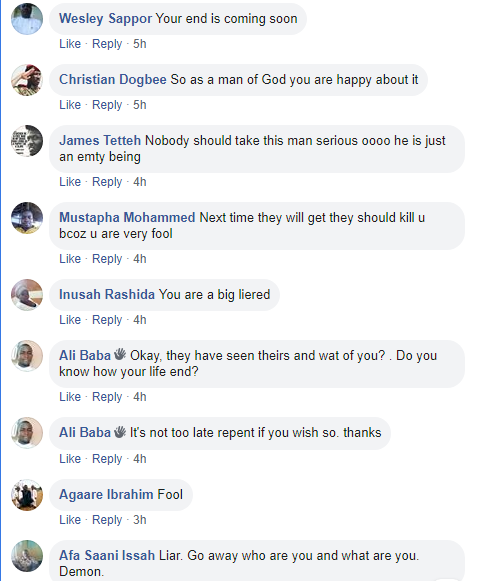 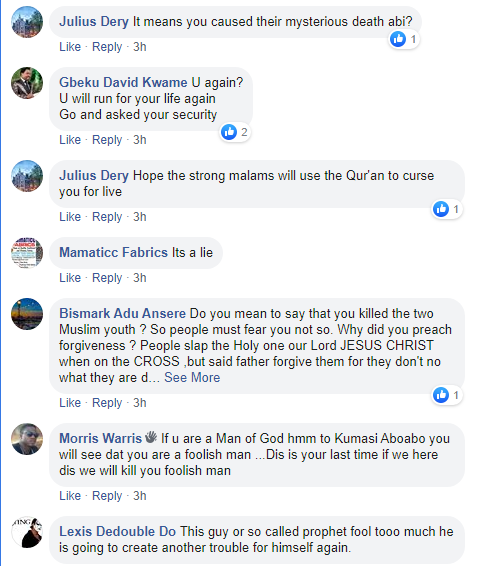 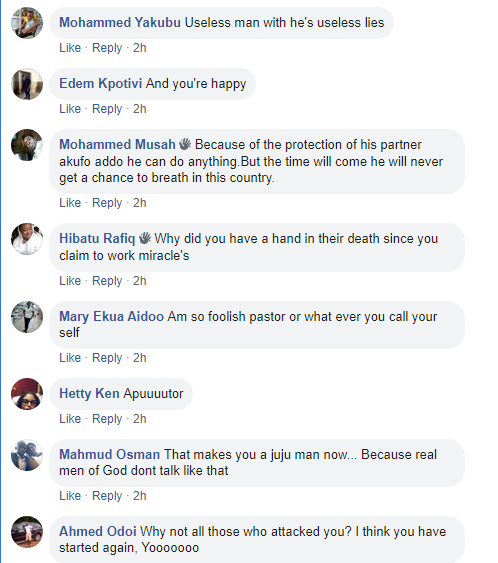