You're not humble - Jane Naana slammed over her posture before Asantehemaa 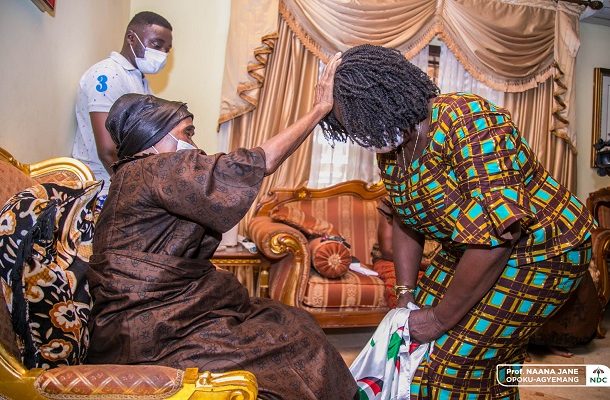 Running mate to the NDC flagbearer - John Dramani Mahama, Professor Jane Naana Opoku Agyemang, is not humble, this is according to an outspoken member of the ruling NPP, P.K. Sarpong.

Both the veep and Prof Agyemang visited the queen for her blessings prior to their campaign tours of the Ashanti Region ahead of the December 7 general elections.

The Asantehemaa asked the blessings of the Lord upon the lives of the two and their entourages and also prayed for peace and calm in this year's election.

In the Asantehemaa's palace, Dr. Buwumia knelt before Nana Ama Konadu Yiadom to receive her blessings.

Prof Naana Jane was, however spotted in a versatile posture while also receiving the Queen's blessings.

But commenting on the two postures, Patrick Kwarteng Sarpong slammed the former Education Minister, remarking that her "posture while receiving her blessings is not anything to write home about."

According to him, unlike Naana Jane, Dr. Bawumia showed "greater level of reverence in front of the Asantehemaa".

"The Veep is humble whereas the running mate is not.", P.K's position stated.

Read his full assessment below:

Observe the two scenarios in the accompanying image.

Vice President Bawumia kneels down for his blessings from the Asantehemaa.

Naana Jane Opoku-Agyemang's posture while receiving her blessings is not anything to write home about.

The Vice President shows a greater level of reverence in front of the Asantehemaa and the one who is angling to become Veep is not exhibiting same traits.

The Veep is humble whereas the running mate is not.

Francis Ganyo 2 days ago
Do we have to criticize everything in this country?