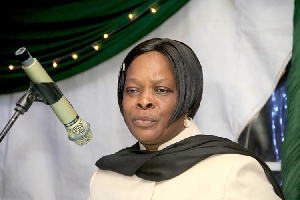 Zambia's First Lady Esther Lungu broke down in tears and fell to her knees as she appealed for an end to a spate of mysterious gas attacks that have spread across the country.

Police have been unable to catch those who have been targeting homes and schools by spraying victims with a gas that leaves them unconscious.

It is not clear what gas is being used in the attacks.

Mrs Lungu was filmed on Tuesday telling a group of women that:

"I'm making an earnest appeal to the people that are behind this gassing - to an extent of gassing innocent schoolchildren, innocent families. It is indeed a shame," Mrs Lungu was filmed on Tuesday telling a group of women.

She then broke down in tears.