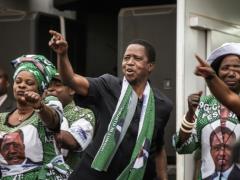 Lungu, who won the August 11 election by around 100,000 votes, condemned the violence.

"Zambia has had a long record of peaceful elections -- it was disheartening to witness the post-election violence," he told parliament.

"I condemned the violence in the strong terms and I still condemn it."

Hichilema, a wealthy businessman who has run five times for president, accused Lungu, the election commission and court judges of fraud over the vote result.

With prices of copper, the country's key export, on a downward slope and unemployment and inflation soaring, Lungu said Zambia had to diversify its economy.

"We have to make agriculture a real business venture and our focus should be boosting agriculture production," he said.

Lungu also vowed to fight corruption, saying there would be "no sacred cows and sacrificial lambs".