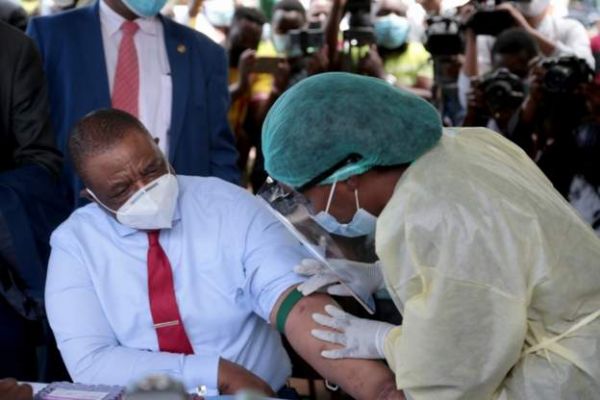 Zimbabwe has launched its Covid-19 vaccination campaign, with Vice-President Constantino Chiwenga taking the first jab in a bid to reassure the public that they are safe.

Zimbabwe is rolling out the Sinopharm vaccine, donated by the Chinese government. Only 200,000 doses have so far been delivered, with another 600,000 expected next month.

The vaccine is first to be given to public health workers, police officers, soldiers and prison officials.

Zimbabwe aims to vaccinate 10 million people and is still sourcing other vaccines to achieve this target.

On Tuesday, the government said the coronavirus variant first discovered in neighbouring South Africa now made up more than 60% of cases within its borders.

It is the first country outside of South Africa to report that the so-called "501.YV2" variant is the dominant strain.

The Sinopharm vaccine is 79% effective, and has shown some success against the variant discovered in South Africa, Zimbabwean officials say.

Human rights lawyers have threatened court action; they argue that trials of the vaccine should be completed before it is widely used.