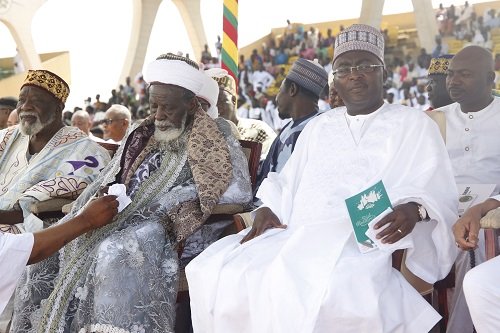 Government has initiated two initiatives to improve access to medical training and pre-tertiary education in the northern part of the county and Inner Cities and Zongo communities, nationwide.

The opportunities announced by the Vice President Dr Mahamudu Bawumia, Sunday, include the construction of a medical university and 42 secondary schools in the northern part of the country by the Saudi Arabia monarchy.

Additionally, he said beginning next year, at least 40 youth from Inner Cities, and Zongo communities, as well as deprived areas, would be trained in medicine in Cuba each year, under a programme to boost medical care in the country.

Dr Bawumia was addressing hundreds of Muslims who gathered at the Black Star Square in Accra for prayers to climax the Eid-UL-Adha, the festival of sacrifice.

The annual celebration is in commemoration of Ibrahim’s (Abraham) readiness to sacrifice his young first-born and only son in compliance with a command from God.

Dr Bawumia said the two opportunities were in response to requests made by the government to the two countries in line with its commitment to developing inner cities and Zongo communities.

When the modalities for the Cuba opportunity are completed, he said it should be expected that at least half of the beneficiaries would be females to boost girl-child education.

Recognising the gender sensitivity of access to health care in Zongo communities, he urged Muslims to encourage more girls to study science-related programmes to enable them access opportunities.

Dr Bawumia reaffirmed the government’s commitment to serving the country, assuring that no section of the country would be left behind in the development agenda irrespective of religious affiliation.

However, he said the development of Muslim communities would be derailed without peace and therefore urged Muslims to be vigilant and report suspicious characters who were thirsty for violence, to the police.

With the 2020 elections not far away, he urged Muslim youth not to allow themselves to be used as vessels of violence but ensure that the good name of the religion was not sacrificed in the name of politics.

Instead, the Vice President said they should take advantage of the various programmes being rolled out by the government to better their lives and improve their communities.

He commended the national Chief Imam for his exemplary leadership that had helped sustain the co-existence in the country and urged Muslims to give true meaning to the celebration by adhering to the values of the festival.

The National Chief Imam, Sheikh Dr. Osman Nuhu Sharubutu, who led the prayers, in his sermon, urged Muslims youth to refrain from violence and exemplify Allah in their activities.

He admonished Ghanaians to abide by the national laws so that the country’s enviable religious tolerance and peaceful co-existence would be sustained for national development.