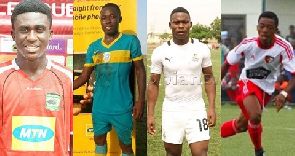 Nothing is more gratifying than seeing a hard-working young footballer rising through the ranks to the zenith of the sport.

Few things excite and incite a fan more than charting the progress of a prodigy right from the neighborhood of nothingness through to the pinnacle of wealth and fame. It is quite fulfilling.

Drawing inspiration from the above, the Ghana Premier League 2017/18 season has only entered Week 13 and yet a host of talented youngsters have already established themselves as key cogs in their teams, while others are enjoying a fairytale campaign. It is fair to justifiably envisage that it won’t take too long a time for some of these wonderkids to make their mark on the global stage as superstars.

Now here’s a list of the top 20 teenage wonderkids in Ghana Premier League. You shouldn’t miss out on their progress.

[Criteria: All teenagers in this list have performed creditably well this season and have made not less than five league appearances. They all turn 19 or a year older by the close of the calendar year]

Amate has been impressive this season, featuring in 11 matches and scoring 2 goals. The telepathy between himself, Richard Danso and joint-league top-scorer, Charles Boateng, has been a sight to behold for fans.

He scored the club’s fastest league goal under 30 seconds against Liberty last season and scored a total of four league goals. Fast and physically dominant against defenders, he has made 10 league appearances and enthralled fans at the Tema Sports Stadium with his effervescence.

He is the only goalkeeper in the list. Asempa has started nine league games and carved a name for himself with his agility and bravado in goal, keeping two clean sheets in the process. His rise to fame two seasons ago when he won the FA Cup has been a stepping stone rather than a stumbling block to his progress.

He is the only player in the list yet to start a league game for his team. The JHS graduate scored one goal and provided three assists in his opening six league appearances. He scored a 30-yard bullet against Dreams FC. The left-footed attacking midfielder is a master of spraying the ball around.

Promoted from the club’s famed academy Auroras, where he was extremely prolific, the young striker has kept his head high by scoring one goal from just three league starts and accumulating minutes from the bench under his belt in his debut top-flight season.

Signed by ProBall Management this season, Zakari, who was promoted last season, has been one of the best performers for the young Inter Allies side. He has shown his ability to ghost past defenders in nine starts as he tirelessly mops up the midfield.

The highly rated left-back is another product of the club’s academy, Accra Youth FC. Fard has played in seven league games. He’s instrumental to the backline that is yet to concede a goal at home, starting in four of those six home games.

Owusu Ansah was promoted by Steve Polack from the club’s dysfunctional youth system. Douglas, a workaholic box-to-box midfielder, has made five league appearances, including an impressive outing at Wa and a near perfect performance in the Super Clash against Hearts of Oak.

Recently completing his SHS programme, the defender has built a strong reputation for himself as a tough-tackling, ball-playing centre-back. Inusah, who studied Business in school has made eight league appearances and has continued from where he left off last season.

The winner of the prestigious MTN?SWAG Most Promising Player award has been the linchpin for All-Stars since last season. He scored 13 league goals last year but has seen his overall contribution dwindle so much in a checkered side lying bottom on the log. He has two goals in seven games.