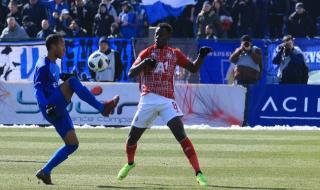 Ghana's Edwin Gyasi will still not play any role for CSKA Sofia as the Bulgerian club deny him a return despite completing his loan deal in the US.

CSKA intends to opt out of Edwin Gyasi's  services as the January transfer window opens.

The Ghanaian has to return to the squad after his contract for transfer to FC Dallas expires at the end of the year.

However, the 28-year-old has become surplus to requirement as the  "soldiers" announce they will no longer rely on his services.

The club is rather looking at options to either sell him or send him again on loan, according report by in the Bulgerian media.

It is also possible to reach termination of his contract by mutual agreement.

The Ghanaian lacked playing time after recording just 4 games and 81 minutes playing for FC Dallas in the fall. In fact, he has not been on the ground since August 15. Currently, Jesse maintains a form on his own in the Netherlands.

Unlike the Ghanaian, CSKA will remain the other returning retired player in the spring - Bozhidar Chorbadzhiski.

The reason is that the defender is not allowed to play for a third different team within one season. He has already recorded matches for the "soldiers" and for the FCB.

Gyasi only wore the FC Dallas team, so it's no problem wearing the team to another team this spring.