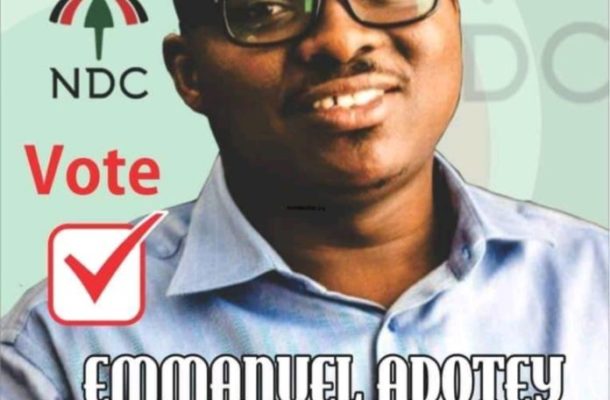 A General Manager of popular Nigerian bank, Fidelity, has raised eyebrows within National Democratic Congress (NDC) circles where he is smelling with suspicion after a secret WhatsApp conversation thread emerged featuring him begging for his dirty files with the Bureau of National Investigations (BNI) to be kept secret.

In the conversation thread, which was captured in a screen shot, Mr. Emmanuel Adotey Allotey, Fidelity Banks Osu Branch GM, is seen pleading with one Bismarck to keep his past brush with the BNI under wraps so it does not taint his bid to become Candidate on the NDCs 2020 Parliamentary ticket for Anyaa-Sowutuom.

Allotey, who is the current NDC Constituency Treasurer for Anyaa-Sowutuom goes as far as to promise to sweeten Mr. Bismarck with a bribe so that he will shut up.

I read your post yesterday on the platform and I want to beg you to stop circulating my previous life and relationship life on the platform. You are my good friend and I beg you not to expose my secret for political gain, a groveling Emmanuel Allotey pleaded in one yarn of the WhatsApp conversation with Bismarck.

Mr. Bismarck, who appears to have been angered into digging up Alloteys past by constant insults that Mr. Allotey and his camp had been heaping on two other people that want to contest the 2020 Parliamentary ticket with then warned Allotey not throw stones since he knows he lives in a glass house.

Then talk to your messengers to stop attacking others. Bismarck also orders Allotey to rein in his attack dogs, or worst skeletons will emerge from the cupboard.

It is at this stage that Allotey begged that some dirty files that he has with the BNI should not be let out and that he is willing to pay for Bismarcks silence.

My case with BNI shouldnt be disclose and I promise to offer you the deal we spoke about. Call me when you are free.

Even though the conversation was confidential, it appears that Mr. Bismarck was angered into releasing screen shots of it on to a WhatsApp platform for NDC members in Anyaa-Sowutuom, after followers of Allotey continued their attacks on people in contest with him for the 2020 Parliamentary ticket for Anyaa Sowutuom.

As the insults kept coming, Mr. Bismark is said to have warned Alloteys followers to stop the attacks or receive reprisals that would undo their camp, however, the insults continued.
Apparently, it was to prove to them that he has a lot of dirt on Allotey that he released aspects of the damning WhatsApp chat with Mr. Allotey.

Now many in Anyaa-Sowutuom are wondering what exactly their Treasurers dirty files with the BNI are. Others with interest in Alloteys campaign to become PC are also wondering if it would not be playing into the hands of the NPP, which could easily pull up these dirty files during the 2020 election campaign if he is elected NDC PC.

The Fidelity Bank Osu Branch General Manager got his opportunity to give his side of the story when the news team contacted him to speak to the issue. Rather than speak to the issue however, he resorted to threats.

I am contacting my lawyers, I will sue the guy who released that information, you can publish anything you want, but I will sue you too if you do, Mr. Emmanuel Adotei Allotey threatened.

Mr. Bismarck would not pick his calls when attempts were made to reach him on phone.

Meanwhile, a traffic of scandalous revelations is in the pipeline, including how some influential people in Anyaa-Sowutuom NDC politics have entered into cahoots to make one man PC so that when National sends down money for Parliamentary election campaign, they can share the money and line their pockets with it.

These conniving influential people are said to believe that Anyaa-Sowutuom is an NPP stronghold and it would be a waste of time to fight for it, even though on the grounds, there is evidence that NDC has a real chance to win it with a serious candidate.