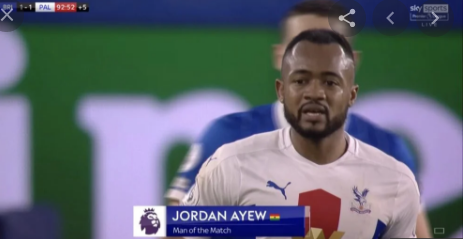 Ghanaian forward Jordan Ayew was the star of the show and was voted man of the match  for his side Crystal Palace in a 2-1 smash and grab win against Brighton at the Amex Stadium on Monday night.

The Ghanaian forward was involved in all two goals scored by Crystal Palace on Monday nighty in a gritty display by the Eagles in a match which they were outplayed but managed to score two goals against the run of play that gave them victory.

Palace's two goals came from their only two shots on target - and touches in the Brighton box - in the whole game, with Benteke steering Andros Townsend's cross back across goal and beyond Robert Sanchez deep into second-half injury time to nick three points.

The visitors had spent most of the game defending, with Brighton registering 25 shots and dominating across the 90 minutes, and looked like they would be forced to settle for just a point through Joel Veltman's 55th-minute goal.

His close-range finish, his first for the club, had cancelled out Jean-Philippe Mateta's own debut goal for Palace before half-time, back-heeling Jordan Ayew's low ball past Sanchez for a wonderful opener.

Deep into stoppage time Jordan Ayew drove forward with the ball before laying a pass to Andros Townsend whose cross from the left was wonderfully volleyed home by second half substitute Christian Benteke to break the hearts of the wasteful Brighton who had all the chances to have won the game.

The Crystal Palace hitman’s remarkable display did not go unnoticed as he was named the best player.