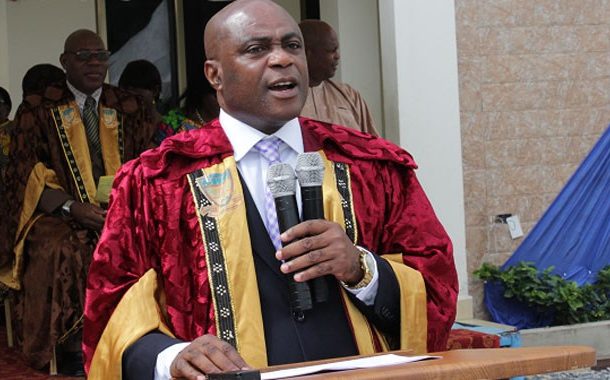 Sacked rector of the Ghana Institute of Journalism (GIJ), Dr. Wilberforce Dzisah, is demanding a whopping GHC25 million as compensation and damages for what he deemed ‘wrongful and unlawful’ termination of his appointment both as a rector and a lecturer of the Institute.

The appointment of Dr. Dzisah as rector was due to expire on September 1 but was terminated on April 1, 2018 per a letter by the GIJ council dated March 21.

No reasons were assigned but it is believed to have been caused by some allegations against Dr. Dzisah who is said to be under investigation for procurement infractions among others.

However, Dr. Dzisah says the termination of his appointment as rector and dismissal as a senior member of the Institute was unlawful as it contravened the country’s constitution as well as the labour law and the GIJ Act among other statutes and international protocols.

Apart from a January 29 “interaction” with an Investigative Committee of GIJ, Dr. Dzisah said he was neither invited to participate in any investigative hearings, nor otherwise given the opportunity to respond to any allegation levelled against him beyond a written response he provided to the Minister of Education in 2017.

Dr. Dzisah’s lawyers, Atuguba and Associates, in a letter dated April 10, 2018 and addressed to the GIJ council stated “GIJ is liable for wrongfully terminating” Dr. Dzisah’s appointment as rector and as senior member of the Institute.


“We have discovered from the facts provided by our Client that the termination of his appointment was a dismissal camouflaged as a termination, as same was motivated by allegations of misconduct committed by him,” the lawyers argued.“And our Client was not given a hearing in respect of the allegations levelled against him, before his dismissal” they added.

Consequently, Dr. Dzisah is demanding payment of GHC10 million as damages for wrongful/unlawful termination or wrongful dismissal as the rector and a senior member of GIJ.

He again wants the Institute to compensate him with GHC15 million for the loss of entitlements which are or would have been due him.

These entitlements, he said, included but not limited to salaries, pensions, allowances, facilities (housing, cars, telephones, etc.), health benefits, and many other perquisites, from the time of the illegal terminations till the actual expiry of his terms of appointment.

He has given the Institute seven days from the day of receipt of the letter, to meet his demands or face legal action.

“We wish to advise, and advice is hereby given, that should you, within seven days (7) of receipt of this letter, fail to commit, unequivocally, to meeting the above demands, we shall proceed and resort to other lawful processes or avenues to vindicate the constitutional, statutory, and legal rights of our Client without further recourse to you,” the April 10, 218 letter warned.

Giving background to events leading to the termination of Dr. Dzisah’s appointment, the lawyers said he on 14th March, 2017 received a letter from the Minister of Education requesting him to respond within 48 hours, a petition addressed for his attention.

Dr. Dzisah, according to the lawyers, responded to the letter and followed it up with a meeting with the Minister of Education.

Not long after he “had absolved himself of all the allegations raised in the letter issued” on behalf of the Minister, he received a second letter dated 19th January, 2018 from an Investigative Committee of GIJ inviting him for an “Interaction” on 29th January, 2018.

Again, Dr. Dzisah responded and attended the said meeting together with his lawyers.

“The Investigative Committee refused to grant audience to his lawyers on his behalf, insisting that they were going to discuss “house matters”, which did not require any legal representation,” the lawyers claimed.

According to the lawyers, the Committee “sternly informed him” that they will not grant him audience unless his lawyers left the meeting.

They claimed that in clear breach of the constitutional right of Dr. Dzisah to appear before the Investigative Committee with a lawyer of his choice, his lawyers were asked to leave the premises of the investigative meeting, before the meeting commenced.

“This and many other unwelcome, harsh, and intimidating acts of the Committee caused the lawyers of our Client to reluctantly leave the premises,” they said.

Dr. Dzisah who resumed work on February 1, 2018 from his annual leave, was the same day ordered to proceed on leave with immediate effect together with Mr. Ofosu.

Acting Deputy Rector, Dr. Ebow Afful, was also relieved of that post and directed to go back to his department.

The governing council, which took the decisions, did not give reasons, 3News gathered.

Though Dr. Dzisah and Mr. Perry had outstanding leave days, sources said the decision that directed the two management members to proceed on leave was part of a calculated attempt by the Council of the Institute to oust them.

On December 21, 2017, reports emerged Dr. Dzisah had been ordered to proceed on leave over alleged procurement infractions but the Institute later issued a statement to debunk the said reports.

It explained at the time that rector was rather taking a part of his annual leave from Wednesday, 27th December 2017 to Thursday, 1st February 2018 to “to allow for a smooth investigation of some concerns raised including academic integrity and procurement practices”.

On resumption, however, Mr. Dzisah was again directed to go on leave by the Council.

In mid-February while on leave, the Council alleged Dr. Dzisah has been removing important documents that could aid in an on-going investigation into financial malfeasance under his leadership.

A letter by the governing council of the Institute to the Economic and Organised Crime Office (EOCO) claimed Mr. Dzisah has been using his driver to “remove material (files and equipment) out of his office” at odd hours.

The Council thus wrote to Economic and Organised Crime Office (EOCO) to investigate Dr. Dzisah and three other management members suspected to have engaged in financial malfeasance among other wrongdoings.

The three others are the acting rector Ebo Afful, the registrar Perry P.K. Ofosu and the procurement officer Kwasi Sekyere Boateng.

Dated February 7, the letter a copy of which was sighted by 3news.com explained that the invitation to EOCO formed part of on-going investigations into the operations of the Institute, which started on September 1, 2014.

The Council wants EOCO to carry out forensic audit “in establishing any shortcomings that might have caused the institute loss of property or finances, and if any, their prompt retrieval”.

It said it was particularly interested in the role and actions, either criminal or otherwise, that the four or others might have played or indulged in, to lead to a loss or wrongdoing.

“We are particularly worried about Dr. Dzisah who, allegedly, has been sending his driver to remove material (files and equipment) out of his officer during odd hours, although on leave and possibly, allegedly, in collusion with the Procurement officer,” the letter alleged.