14 terrifying bridges around the world 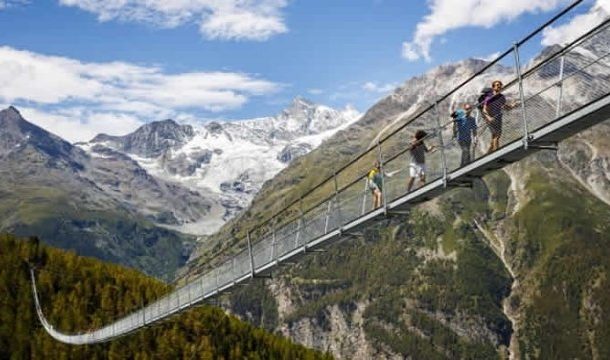 Take a load bearing deck held by vertical suspender cables attached to larger main support lines anchored by a pair of towers and the ground -- and presto. Suspension bridge. Easy as that.

Until you're pulling up to one of these magnificent monsters.

Then all science and civility goes out the window.

Looming in front of you is a hulk of steel, concrete, high tensile wire and glass (glass!) that is clearly the work of strange sorcery.

Higher, longer, completely see-through. The latest record-breaking suspension bridges dare us over the abyss like never before. As do some of our favorite sufficiently still-intimidating oldies.

For some knee-wobbling, knuckle-whitening appreciation, take a drive, walk or crawl across the following 14 frightfully stress-inducing spans.

Anyone can stare out of a very high window. But standing on one -- coaxing your feet onto a glassy surface suspended above nearly 1,000 feet of air takes some serious spine.

But ask anyone venturing onto its triple layered, steel-frame-supported, sledgehammer-tested, crystal-clear span levitating 984 feet above an all too visible canyon floor. It's still the highest.

Just when you think China's glass bridge ceiling has been reached, along comes the latest record shatterer.

Up to 600 visitors are permitted on the 715-foot-high bridge at any one time, which has been designed to permit a slight "sway" for an extra unnecessary thrill.

When: The original bridge dates to 1889.

Whoa: It's suspended 230 feet above the Capilano River.

Although the original 1889 bridge constructed of hemp rope and cedar planks has long since been replaced with wire cables and concrete reinforcements, crossing this foot bridge suspended high above the Capilano River involves just enough bounce to make even the most nonchalant crosser a little nervous.

Add dozens of visitors simultaneously coming and going along the narrow stretch -- a frequent occurrence during the park's busy holiday lights season -- and anyone with a keen sense of catastrophe and vague "Indiana Jones" recollections won't want to waste much time oohing and aahing over the Pacific rainforest scenery.

But that would be a shame. The foliage-fresh air is perfect for a deep, calming breath.

Built in a mere six months for a thrifty-sounding $350,000 (that reportedly was $100,000 over budget), Cañon City, Colorado's top tourist attraction would claim "world's highest bridge" honors for more than 70 years until China's bridge projects began pushing to new apogees this century.

Suspended 956 feet over the Arkansas River, the 1,280-foot-long, 1,292-wooden-planked steel-base-structure was reinforced in the early 1980s with new cable anchors and suspension rods -- recently surviving a 2013 wildfire.

Home to a gorge-side amusement park, the bridge is accompanied by an aerial gondola ride, a Royal Rush Skycoaster plunge and a whoosh along America's highest zipline, if a walk or after-hours drive across this chasm isn't quite harrowing enough.

When it opened in July 2017, the Charles Kuonen Suspension Bridge was dubbed "the world's longest pedestrian suspension bridge" by Zermatt Tourism, a lofty claim that no other tourism board on either side of the Swiss Alps has dared to refute.

Hanging across a forested alpine valley near the resort town of Zermatt, the bridge marks the climactic final leg of the signature Haute Route trek through the French and Swiss Alps.

Measuring 1,621 feet long and 25 inches narrow, the bridge reaches a height of just under 279 feet somewhere in the middle section. But who's really looking down to make sure exactly where?

An easier view from up here: staring across the valley for wide-angle vistas of the iconic Matterhorn summit.

When: Blowing trans-China commuters' minds since 2009

Perched between two bright yellow towers above a yawning river valley in the rugged mountains of central China, the world's second highest bridge (to China's cable-stayed Duge Bridge) looks like something miraculously dropped into perfect position from the sky.

How else could this 4,009-foot-long, 71-sectioned, 20-years-in-the-making, acrophobia-inducing linchpin of a new east-west expressway between Shanghai and Chengdu have been pulled off?

When: Collecting steep tolls since 1998

What's scarier on the world's longest suspension bridge: the drive or the toll?

Enforced with a dual-hinged girder system to withstand 178 mph winds, 8.5-magnitude earthquakes and hostile sea currents, the remarkably resilient structure connecting Kobe and Awaji Island sees more than 23,000 daily cars that know a scarily solid investment when they cross one.

Whoa: Just 7 meters above the surf

Any closer to the frothy mouth of the Storms River while moseying along its namesake 252-foot-long pedestrian suspension bridge and your toes will be coated in salt.

For a louder scream, head to nearby Bloukrans Bridge just down the highway on the Western Cape -- home to the world's highest bungee jump.

Whoa: Turkey's longest bridge crosses one of the world's most intense earthquake zones.

The crown of Turkey's O-5 motorway between Istanbul and Izmir, the Osman Gazi is one of the world's longest suspension bridges and currently the longest bridge in the country.

Stretching nearly 3 kilometers over the Gulf of Izmit (and a major earthquake zone), the six-lane bridge's steel pyloned concrete foundation rests on a massive gravel bed to cushion it from big tremblers, which is equally comforting and disconcerting.

Next up: Turkey's Cannakale 1915 Bridge, connecting Lapseki and Gelibolu (Gallipoli) across the Dardanelles, is expected to become the world's longest bridge when it opens in time for the country's 2023 centennial.

Whoa: If you're too scared to cross this 5-mile bridge, someone else will do it for you.

Crossing the "Mighty Mac" between Michigan's Upper and Lower Peninsulas and two Great Lakes can fray driver nerves even when winds aren't exceeding 30 mph, which happens often enough on one of the world's longest bridges with a center suspension span that can shift 35 feet to either side in high crosswinds.

If that alone makes you want to turn around, the Mackinac Bridge Authority offers a free Drivers Assistance Program to get you across this bridge. In a given year, more than 1,000 drivers will take them up on it.

Some extra reassurance: 1998 marked the historic bridge's 100 millionth crossing. So you should be fine.

Whoa: Most middle-aged, semi-retired bridges in the area look even scarier.

They don't build bridges in Northern Pakistan's Karakoram Highway country like they used to -- which is a very good thing.

Home to some of the diciest rope bridges biding their time over remote rushing mountain rivers, the area has endearingly nicknamed at least one of them Pul-e-Sirat: the "bridge between heaven and hell."

Dangling for 500 feet (but otherwise an eternity) between its namesake city and Gilgit-Baltistan, the Danyor Suspension Bridge earned its heaven-and-hell moniker the honest way: by serving its community for more than 50 years before being officially deemed unsafe for normal traffic by district officials.

12. Frighteningly back in business: OJUELA BRIDGE

Whoa: Heavy loads of precious minerals crossed this abyss more than 100 years ago.

What else but late 19th-century gold fever could have led to the construction of this chillingly narrow, exposed metal span over a deep gorge in the northwestern Mexican desert?

One of the world's longest suspension bridges of its day, the 1,043-foot-long Ojuela Bridge was left to a slow rusty death after mining operations ceased in the 1930s, leaving a mineral-stripped ghost town to molder away on the far side.

Reopened in the 1990s, the restored bridge now welcomes off-the-beaten-path thrill seekers who can follow it up with a zipline ride if their adrenaline supply allows.

A hundred miles up the road is the area's other out-there tourist attraction: Zona del Silencio -- a mystically "silent" patch of desert in the neighboring Mapimi Biosphere Reserve.

As for the region's signature bridge, there's nothing silent about those vintage creaking noises.

Whoa: Busiest bridge of its kind in the world

India's most humanity-choked cantilever bridge, designed with a central 1,500-foot suspension span, carries about 100,000 vehicles and up to a million pedestrians daily. And then there are the cows.

The iconic, three-tier, eight-lane "spine of steel" connecting Kolkata with Howrah over the Hooghly River has weathered unique challenges over 75 years of rampant use -- ranging from cargo vessel collisions to corrosion issues caused by excessive bird feces (hawks, crows, pigeons and bats have all claimed residence here, too) to, of course, overwhelming congestion.

More than half a century ago, the bridge was officially renamed "Rabindra Setu" in honor of India's first Poet Laureate, Rabindranath Tagore.

Word of this has yet to actually reach the Howrah Bridge masses, who are a little tied up right now.

Proposals for a bridge linking the island of Chiloé to mainland Chile in the country's deep south have come and gone since the early 1970s. Until now.

Bridge supporters envision an economic boost for a remote, culturally distinct island tenuously connected to the rest of the country by ferry service. Opponents fear economic opportunism and a loss of cultural distinctness.

Can such a gap be bridged? Stay tuned.