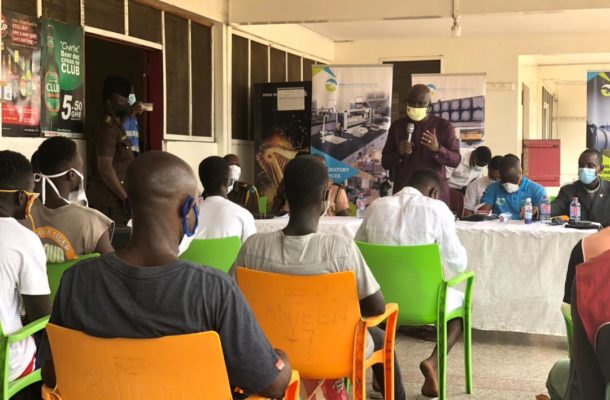 There were scenes of emotion atthe Sekondi Prisons yesterday when 15 young inmates serving variousterms due to their inability to pay fines imposed on them by the courts walked to freedom.

Zeal Environmental Technologies Limited (ZETL), an oil field mining and industrial waste management company,intervened to pay the fines totalling GH¢30,000,for the inmates who were serving prison terms of between eight and 24 months.

Individual fines slapped on them by the courts ranged between GH¢1,200 and GH¢6,000. Some of the freed inmates shed tears openly asthey told theirstories. It was all joy in the end when the prison officers handed them their dresses and told them they were free to go home.

In addition to paying the finesfor the inmates,ZETL also donated some medical supplies to the Prison Infirmary to support the healthcare needs of others.

In the words of the freed prisoners, the prison environment was very harsh.

According to some of the prisonerswho spoke to the Daily Graphic, the crimes for which they were convicted and sentenced included petty thievery.

The released prisoners thanked ZETL for the support and promised to change their conduct for the better.

The Chief Executive of ZETL, Mr Kwaku Ennin, said the company considered the move as part of its social support programme which was run under its social investment unit,the Ennin Medical Foundation. He said no child was born a criminal and that those who unfortunately found themselves at the wrong side of the law were a creation of society.

Mr Ennin said the company heard about the plight of the inmates and considered it important that they were given the opportunity to mend their ways and to also have a second chance at life.

He added: “As an organisation partnering with the Ghana Prison Service,we see the paying of finesfor the 15 inmates as part of our civic duty to the less fortunate in society.”

He said the company would, in the next phase, focus on female prisoners and help to get them reintegrated into society.

Mr Ennin encouraged the released prisoners to “comport themselves and reconstruct their lives and also be tolerant, control their anger and stay away from crime.”

A Senior Prisons Officer at the Sekondi Prisons, Superintendent of Prisons Mr Samuel Amarfio,said the best way the 15 who had gained their freedom could offer gratitude to ZETL was notto go back to the life of crime. He commended ZETL for the gesture, adding that the prison service needed support with its efforts to reform prisoners.