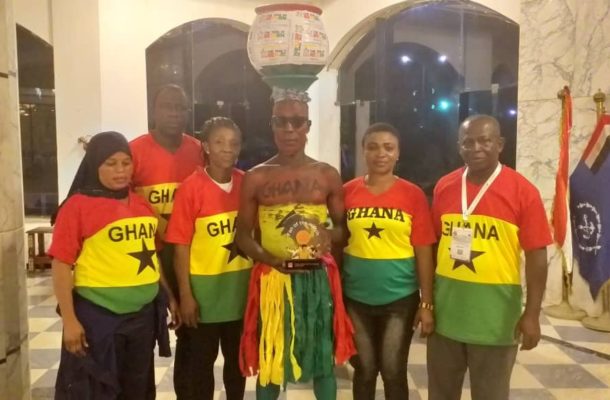 Samuel Aggrey, popularly known as "Obuor" was adjudged the “Best Supporter” at the Suez Stadium Stadium, after the Black Stars beat Guinea-Bissau 2-0 to qualify to the next round of the ongoing African Cup of Nations (AFCON) 2019.

Obuor won the hearts of many at the stadium as he was seen with his trade mark of a body painting in the national colours and a pot with burning flames.

His antics and display got the attention of many as fans close to him took pictures to celebrate with him.

Obuor, who has won many accolades and admiration from football loving people locally and internationally had been to the Federation of International Football Association (FIFA) and many AFCONs.

According to him, the 2019 AFCON was his third time of coming to Egypt to support the National team with his display.

He noted that the display from the Stars was a great one, which would help them go far, so he can continue with his display to win more hearts in the competition.