2024 Battle: Bawumia is the defending champion; he's the darling of Kufour and Nana (Part 1) 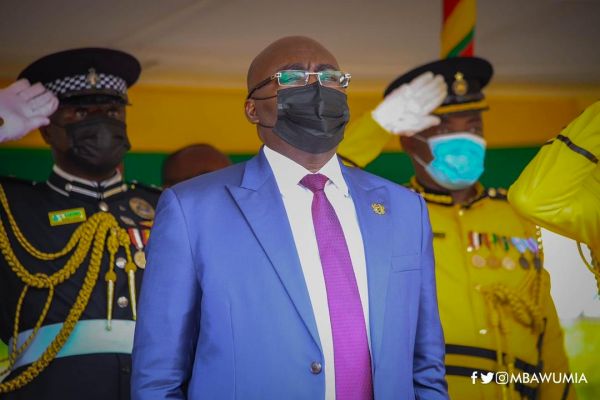 Walewale Adam Smith, Samira is a fulani, He is not NPP founding member, are some of the hazards Dr Mahamadu Bawumia has been threatened with, as a consequence of his being at the front line of contemporary politics in Ghana. Either that, his journey began with that decisive decision by President Kufour to draft him into his government or with that solemn pronouncement from then flagbearer Nana Addo Dankwa Akufo-Addo before that mammoth gathering of the New Patriotic Party, to the extent that, he has settled on Dr Mahamadu Bawumia to become his running mate. But, as regard should have to the content of an individual, this may be besides the point.

As a matter of indisputable fact, the instrumental force and significance of Dr Bawumia is clearly expressed, and Dr Bawumia has demonstrably manifested same, as and when the going has become very tough for the NPP, irrespective of when in opposition or in Government. Evidenced of his significance, can easily be seen from his painstaking efforts in researching, studying, analysing and presentation of data. Its aim was critically to expose the incompetence of NDC and to make apparent the usefulness of the NPP before the eyes of the Ghanaian people via his masterful presentation of intellectually stimulating lectures, and the skillful proposition of intellectual judgement on a better governance approach which sometimes the NDC would reluctantly come into admission or concurrence with. Likewise, Dr Bawumia's selfless assumption of duty as a "STAR WITNESS" and his admirable delivery of appropriate responses to the thought provoking queries from Judges and Lawyers coupled with his impressive effort in the committee he led to gather pink sheets and other important evidences prior to the Supreme Court petition, cannot be lost on the NPP. In the same vein, the NPP whether in government, either of President Kufour or President Akufo-Addo, has concerned, featured and benefited from the intellectual efforts of Dr Bawumia as far as good policy and good governance is concern. Mr Osafo Marfo, Finance Minister under President Kufour's government captured it aptly "if there was anyone who provided unalloyed support to his superior in the case of Governor [Paul] Acquah (under President Kufour regime), then it was Dr Bawumia." Indeed, in one encounter, President Kufour in describing the visionary leadership qualities of Dr Bawumia posited that, "the nation must count itself fortunate to have such a son as Alhaji Dr Mahamadu Bawumia." This authority of President Kufour is very telling and compelling of the positive energy of Dr Bawumia.

This time under President Akufo-Addo, Dr Bawumia is the chairman of the economic management committee. In respect of the importance of Dr Bawumia to this government, Mr Osafo Marfo then Senior Minister and member of the economic management team fairly put it, "if there's any man who pays attention to details, then it is Dr Bawumia....If one man has contributed positively to the performance of this current government, in my view, it is Bawumia." With the force in this authoritative statements by these founding and leading members of NPP, one is inclined to accept that, chief in the worthy experience and skills of Dr Bawumia is an incorporation of qualities, both of Kufour and Nana. With such privilege, hopefully, a better leadership is in stock for Ghana and the NPP.

We must admit that, the search for a President for any country, then and now will demand from any likely choice a significant understanding of the intricacies of international and domestic economics and politics of that respective economy. Respectfully, even though, the economic management team comprises of Ministers, such as Alan Kyeremanten, Afriyie Akoto, et al; isn't it fairly a profound testament of the instrumental significance of Dr Bawumia in Ghanaian politics such that, anytime matters regarding the economy of Ghana is under scrutiny, Dr Bawumia would leapfrog and dominate the mind’s eye of the ordinary Ghanaian? One event, prior to the 2020 elections, the NDC had hijacked the airwaves with cacophony of false alarm on borrowed monies and loans by the Akufo-Addo administration. It had to take the intervention of Dr Bawumia who spoke on Eagle 87.7 FM in cape coast to quench and expose the mischief in that wicked untruths.

Today, there's a new hatched cliché "Fix the country" by hatchet men of the opposition NDC who are struggling to fix their party, and before we will say "Jack", the powerful name of Dr Bawumia is being called upon to submit into rescue by legislators such as the Honorable Kennedy Agyapong. Indeed, in less than 24 hours, Dr Bawumia published honest facts and verifiable data that effectively describes how the Akufo-Addo administration is fixing Ghana to which contradicts the populist campaign. Much to his credit is Dr Bawumia's helpful commitment to an efficient and productive Ghana via digitization. It speaks not only of the relevance and importance of how public spirited and socially concern Dr Bawumia is indeed to Ghana, but essentially it demonstrates the appreciation, of the essential bulwark Dr Bawumia has become as regards visionary governance, by the Ghanaian people.

As President Akufo-Addo will constitutionally and legally end his Presidency in 2024, it is usual of the NPP as a democratic party to experience the jostling to succeed him. However, it has been hoped that, the exercise is characterized in the spirit of camaraderie, unity, circumspection, and mutual respect for one another. Alas, it is quite astonishing that elements with questionable loyalty to the NPP who are in active opposition to the grown clarion call by NPP rank and file on Dr Bawumia to lead the NPP, will actively engage in the shopping for distasteful falsehoods, unreasonable and mischievous stories to discredit the powerful brand of Dr Bawumia. Factually, the NPP tradition is the most formidable and enduring in Ghanaian politics dating back to 1944. The only constant factor with the NPP tradition is the changing of its name- UGCC, UP, PP, PFP and NPP.

The question begs, if "asomasi" or a certain person was not a member of the NPP tradition even in as late as 1979 and not 1944, what then is wrong if it is said that Dr Bawumia was not there in 1992 during the reformation days of NPP? On the same stretch, a safe argument is that, Dr Bawumia was appointed as a co-chair of the Economic Policy Coordinating Committee in 2002 under the first term administration of President Kufour. Isn't it a sustainable argument that, Dr Bawumia more likely than not identified himself with the NPP long before he was selected as the running mate of then candidate Akufo-Addo? Indeed, the Honorable Boniface Sadik Abubakar former Madina legislator, who was also being keenly considered at that time in 2008 as running mate to candidate Akufo-Addo had joined the NPP from the NDC and there hasn't been any issue with that. In the case of Dr Bawumia, it is daring to say that, there is no record identifying him with any other political party prior to his selection in 2008. As this is the case, why must some avowed naysayers seek to crucify him with a mere date of party card acquisition? Assuming the announcement by John Boadu to the extent that, all members and sympathisers of the NPP are to be re-registered with a new party card, is given effect in 2021, are all members of the NPP not going to have the same year 2021 inked on their membership? Isn't the "shade" about date of membership card acquisition, ridiculous and much ado about nothing? Is a member of a group no longer the one who identifies themselves with that group? Can we differentiate between the vote of a member with no party card and the vote of a member with party card? Do we realise that, in 1996, a former NDC member and vice president to President Rawlings, Kow Nkensen Arkaah became the running mate of President Kufour? Let it be pronounced that, the NPP tradition is one of inclusiveness. A rather compelling argument also has is that, as we are born at different times, we attain our citizenship ID cards at different times, however, does the difference in birth time subjects anyone to being treated any less or being discriminate against than anyone else in terms of their rights, privileges? Can we ask our naysayers, to elevate their arguments? Can we ask of them to be a bit optimistic in their heated disagreements regarding the popular demand of Dr Bawumia to lead NPP by majority NPP members?