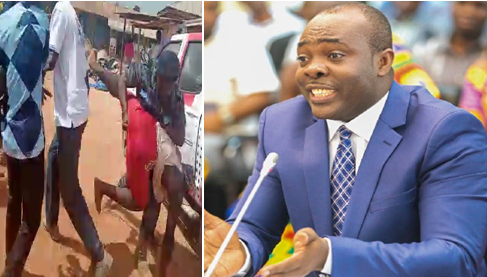 A 24 year-old man has allegedly been beaten mercilessly by police officers who were with Hon Isaac Asiamah, a Member of Parliament for Atima Mponua constituency in the Ashanti region on Friday, November 20.

Mr Ibrahim Ishak met the wrath of the brutal policemen for challenging the MP to tell the truth to the people, after repeating a four year old unfulfilled promise.

The tragic incident happened when Hon Asiama who is also the Minister for Youth and Sports was on a campaign tour at Ayinansa a small community in the Atima Mponua district.

Mr. Abdul Fatawu who is a senior brother to the victim (Ibrahim) confirmed the news in an interview with Ghanaguardian.

He (Mr. Fatawu) said, “Hon Asiamah in his address mentioned that he has done a lot for the Atwima Mponua District and he is trying to do something for Ayinansa which his brother (Ibrahim) quickly responded to the MP… You are lying, last four years you came to make this same promise to us so why are you saying it again”.

The statement by the victim (Ibrahim)  did not go down well with a driver to the MP which calumniated into a fight between the two, the report said.

According to Mr. Fatawu,  the police officers rush there and started beating his brother (the victim). After they took him to Nyinayini police station and put him into cell.

“We tried to seek bail for him but the police refused, they said they will take him to court and as a family we will do our best if the deny us then will know what to do”. He added.

The MP has been accused of unfulfilled promises by a section of his constituents who believe has little to show after almost 16 years in Parliament.