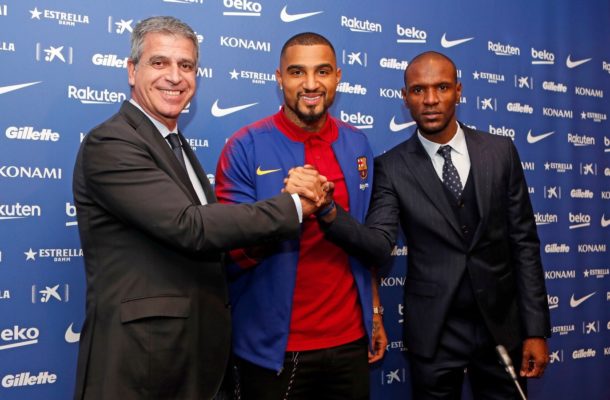 One of the most surprising transfers of the January transfer window has been the transfer of striker Kevin-Prince Boateng from Italian side Sassuolo to Barcelona.

His move to Spain is a six-month loan deal, with an upfront payment of £870,000, and an option to make it a permanent transfer for only £7.1 million at the end of the season.

The transfer came in as a shock for many footballs fans and pundits around the globe. Recently, Barcelona has had a tendency to sign players on a short term basis depending on the situation and requirements of the club. Boateng's move to Barcelona might be another case of Barcelona signing a player to fight the current situation at the club.

Here are the three main reasons why Barcelona have signed Kevin Prince Boateng.

Even though Boateng is not playing at the level he used to play in the early years of his career, he is still a more than good enough option for Barcelona. Boateng has the ability to play in any of the forward positions.

He does not only adds a new dynamic to the Barcelona attack but also acts as a cover for each attacking option up front. At Barcelona, he will always be a second choice striker behind Suarez, but if he impresses in the little opportunities he gets, Boateng just might become a regular option at the club coming off the bench.

Boateng started his career as a very promising player but has not lived up to the high expectations everyone had from him. He is a very tough guy, who will be determined to give his all and revive his career at the very highest level.

Barcelona paid a fee of £870,000 for the services of Boateng and if the player is to sign on a permanent basis then Barcelona will have to pay just £7.1 million for the player.

In today's market, these figures are nothing as compared to the fee being paid for less effective and less talented players. For a club like Barcelona, such a fee will make no difference to their finances.

There is close to no risk involved in this signing. If the club is satisfied with the performances of Boateng over the next six months, then they can make this a permanent transfer, otherwise, they can send the player back to his parent club

It is also very difficult to lure away top players from their respective clubs in the January transfer window. Top clubs refuse to sell their star players at this time of the season and the players are also hesitant to move in the middle of the season. In such a situation, Boateng became a very realistic option for the club.

Convincing the club and the player was not really a difficult task for Barcelona. The Catalan club has a very good relationship with Sassuolo. The two teams are even in talks to form a partnership and thus signing Boateng must have been very easy.

After Ousmane Dembele's injury and Munir's departure to Sevilla, Barcelona found themselves with lack of attacking options up front. Luis Suarez and Lionel Messi have been subject to very heavy workload already and lack of options upfront meant that they would have no time to rest.

If anyone of Messi or Suarez gets injured, Barcelona will have to do with playing fringe players, who might not be able to get the possible results. With the arrival of Boateng, the club does not only get variety upfront but it also gives the manager an opportunity to rest the main attackers at the club, keeping them fresh for the big games.

The signing of Boateng can go both ways for the club as well as the player, but there are many good explanations to understand what Barcelona must have thought before signing the player.