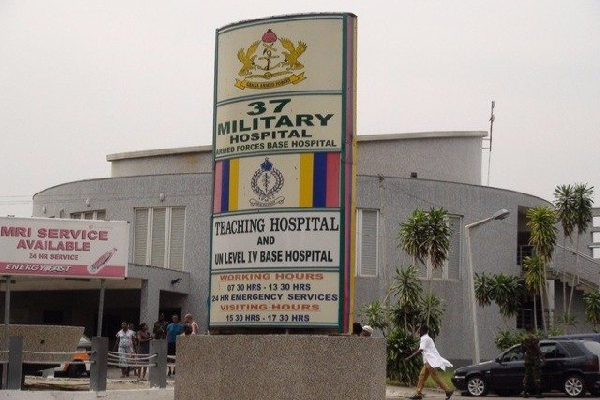 The 37 Military Hospital has been hit with a GH¢2 million suit for medical negligence in the handling of a patient by name Solomon Asare-Kumah.

Family of the 48-year-old who died at the hospital after surgery are alleging that officials of the hospital did not follow due process in handling their departed family member.

They are alleging among other things that the health officials at the hospital wrongfully inserted an oxygen tube and malfunctioning drill in Asare-Kumah during the surgery.

In a writ of summons, the family also mentioned that death of Asare-Kumah has caused them emotional and mental stress.

The family is praying the court to grant them over GHC¢2million as damages against the 37 Military Hospital.

Asare-Kumah who was a Ghanaian based in the United Kingdom visited the country in 2019 and took ill.

He was diagnosed with non-cancerous brain tumor that required immediate surgery for removal.

The family is quoted by Myjoyonline to have mentioned the name of one Colonel Appiah as the one that recommended the immediate surgery.

The emergency surgery was however postponed several times with all kinds of excuses being proffered by the hospital.

“At a point, he took my brother to the theatre, he was administered anaesthesia and everything. After four or five hours, the surgeon brought him back to the ward that he couldn’t perform the surgery… Another time, the surgery couldn’t happen, he postponed it again with the excuse that the drill machine that he was going to use wasn’t functioning. So, he was going to purchase another one from South Africa,” said the deceased’s brother called Emmanuel.

He said after the surgery, his brother got swollen like a balloon and that “If you touched him he felt so soft, like rubber. I had to calm myself down because I was so angry.”

Unfortunately for the family, Asare-Kumah died twenty-four hours after the surgery.