Over 100 NDC members defect to NPP at Mpraeso 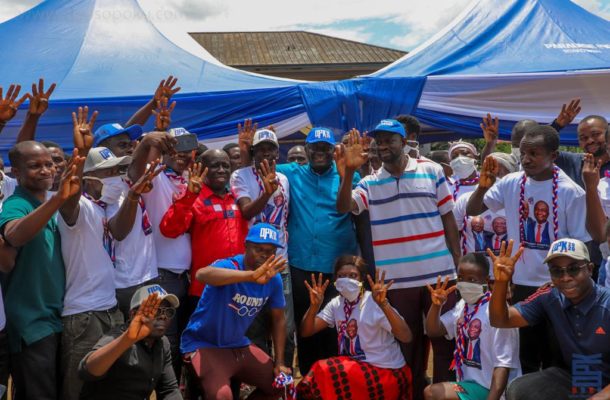 With less than three (3) months to the 2020 general elections, some 126 members of the opposition National Democratic Congress (NDC) in the Mpreaso Constituency of the Eastern Region have defected to the ruling New Patriotic Party (NPP).

According to the group, they have associated themselves with a party that was born and raised in falsehood.

The said their main reason for leaving the NDC is that the NPP and President Nana Akufo-Addo have exceeded expectations in terms of the campaign promises he made back in 2016.

The leader of the group, Evans Osei said when the Vice President, Dr. Alhaji Mahamudu Bawumia indicated at the town hall meeting a few weeks ago that the NPP has achieved more than 75% of their promises he willingly sided with him because the massive infrastructure boost in Mpraeso alone tells a lot about this current administration, adding that at first, “we were in the dark but now we have seen the light”.

The group including some Assembly members declared their intention to join and campaign for the NPP at a presser held at Kwahu-Mpreaso.

“Yes! it's true we have defected from the NDC. It's not because others are defecting but because this government is on the right path and beats almost every government under this fourth republic. Their achievements within a three and half year period is unimaginable”, said Evans Osei.

He continued: “This government has really done well. We thought they were joking but look at how massively they have lifted the country's economy. He made so many promises which we thought he won’t be able to deliver but he is doing just that. And here in Mpraeso, we have gotten our 1D1F, moreover, this constituency is facing a huge facelift in terms of development”.

“The NPP led by President Akufo-Addo has good visions for Ghana and it will come to realization when all Ghanaians give them another four years to continue their good works”, he rallied support.

Mr Osei confirmed that more individuals are defecting and joining their group as they intend to garner 98% for Nana Addo and candidate OPK in December polls.

“We want to win for votes for Nana and Denis Opoku Ansah the NPP parliamentary candidate for Mpraeso constituency so that they can continue to deliver Ghana out of the crisis. This season of the COVID-19 has shown clearly that Ghana has a leader and it's up to all of us to maintain him or risk losing all the good things”, he added.

The NPP Regional Secretary, Jeff Konadu Addo who was at the forum, thanked the members for acknowledging the good works of the NPP and also trusting in the President.

Jeff Konadu Addo gladly accepted the group to the NPP.