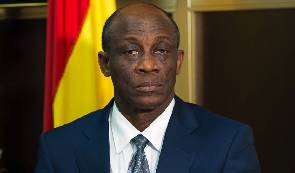 The Minister of Finance, Seth Terkper has announced the approval of a $230 million scaling-up Renewable Energy Investment Plan (SREP-IP) by the Climate Investment Fund.

The approval, which will allow government to invest in the mini-grid sector, is expected to increase the country's renewable energy generation capacity to achieve price reduction in electricity.

According to Mr. Terkper, the plan would be public sector-led, with the private sector providing essential services such as engineering, procurement and construction.

"The SREP-IP is currently being considered by the government for implementation. The Ministry of Power would leverage additional financing to achieve flagship investments in the renewable energy sector under the SREP-IP Programme," he said.

Speaking at the second edition of the Ghana Renewable Energy fair themed, 'Energy and Energy Efficiency, Accelerating Energy Access and Security,' Mr. Terkper, whose speech was read on his behalf by Deputy Minister of Finance, Mona Quartey, said the government is well aware of the important role renewable energy can play in accelerating and catalyzing the country's socio-economic development and the achievement of universal access ahead of the target date of the UN Sustainable Energy for All Initiative.

"The government is poised to scale up the construction of more mini-grids to cover the over 200 islands and 2,000 lakesides communities in the medium term," he said.

The Finance Minister also indicated that government has taken a major policy decision to mainstream mini-grids into the nation electrification scheme.

As a result such communities would enjoy the same electrification packages offered their counterparts in grid-connected communities, he said.

He urged all actors in the renewable energy sector to make their presence felt during renewable energy fair by sharing experience and creating the right synergies to propel the collective efforts in achieving the country's renewable energy medium-term target of 10 percent by 2020.

Dr. Kwame Ampofo, Chairman, Energy Commission, Ghana, touching on the renewable energy fair, said the event was borne out of the need to bridge the information gap that exist between the industry and the desired market environment as envisaged and stipulated in the Renewable Energy Act, 2011 (ACT 832).

He said after the first successful fair, the commission launched the National Rooftop programme, a capital subsidy scheme under which free solar panels up to a maximum capacity of 500 watts peak were provided to qualified beneficiaries in the residential sector.

"The aim was to take the residential lighting off the national grid with the use of solar PV technology. The target this year is to install 20,000 solar systems in residential homes," he said.

Dr Ampofo therefore encouraged all Ghanaians to buy into the idea of adopting renewable sources of energy.

.Sign up here to receive daily email alerts of breaking news in Ghana, Africa. GhanaStar.com is your source for allGhana News. Get the latest Ghana news, breaking news, sports, politics, entertainment and more about Ghana, Africa and beyond.