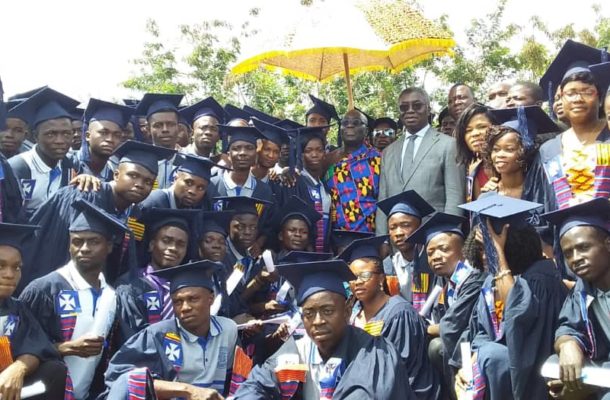 The graduands who are from the mining communities in Kyebi in the Abuakwa South Municipality and Adumasa in the Birim South District were enrolled last year in the Government's livelihood program under the Ministry of Local Government and Rural Development (MLGRD).

They form part of 5,000 illegal miners identified in the communities affected during the ban on small-scale mining.

They were enrolled into the SUVOTECH) and the KTI to pursue a one-year intensive program in building and construction, electrical and automobile engineering, catering, dressmaking, interior decoration, among others.

The Minister of Science and Environment, Professor Frimpong Boateng when addressing about 50 graduands in Kyebi, urged Ghanaians to uphold the values of discipline and decency and also take good care of the environment.

Mr. Frimpong advised the people to maintain the lands and plants by avoiding the cutting down of trees and other bad deeds as he believes plants provide medicine and helps humans in avoiding famine.

He entreated the people not to rely only on white-collar jobs but rather take opportunities in other sectors, particularly in artisanal work.

Again, he cautioned the graduates to work hard as they step out of the school.

The Municipal Chief Executive of Abuakwa South Municipality, Kwadwo Ofori Sarfo expressed happiness following the graduation of some the people who were trained to be able to establish their own jobs in the quest to get rid of unemployment and galamsey.

He has, therefore, called on Ghanaians to support the program to succeed as he believes it is a good initiative from the government.

The Principal of the school, Mr. Augustine Weyage then endorsed the graduands as capable of working in any institution in the country after intensive training.

He averred the graduands have indeed proven that the war against galamsey is almost won.

The Principal said a module modern six-unit classroom block for the institute will be ready when school reopens as a Chinese company intends to build it within 21 days.

He called on the government to address challenges facing the school as soon as possible.

The Chairman of the event, Barima Kwaku Duah revealed that an amount of 150,000 dollars has been voted for the school this year by the Okyenhene, Osagyefo Amoatia Ofori Panin to undertake some projects for the Institution.