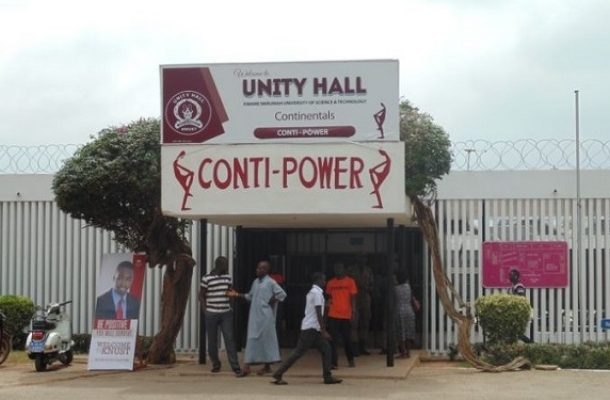 The Kwame Nkrumah University of Science and Technology (KNUST) has cautioned six students for harbouring the opposite sex beyond 10pm on September 7 and 8, respectively.According to a notice posted on the Unity Hall notice board on Saturday, September 15, four female students; Grace Aba Serwaa Scheck (B.SC. Business Administration), Nancy Afuakwa (B.Sc. Chemistry), Stabella Fosuaa (B.A. Social Work) and Rita Nyanyo (B.A. Publishing Students) all residents of Room 143, were found to be accommodating a male student past 10pm on September 7 in their room, which is against the Hall's rules and regulations.Similarly, two male students (Papa Kojo Essuman Addison of room 243 and Israel Atumove Wompiah of room 300) were found in female rooms at dawn on September 8.The notice signed by the Hall Master Dr Emmanuel Gikunoo, said the students have been made to sign an undertaking to be of good behaviour throughout their stay in Unity Hall after apologising to the management of Unity Hall for their actions.'Taking into account the show of remorse and apology to Unity Hall Management from these students and their parents, they have been cautioned and made to sign an UNDERTAKING to be of good behaviour throughout their stay in the Unity Hall", the notice said.The notice warned other students that the maximum sanctions would be applied to other offenders in the future."This caution goes to all other residents of the Hall. Any similar act will lead to maximum sanctions being applied".BackgroundThe development comes after Unity Hall popularly known as "Conti" and University Hall also popularly referred to as "Katanga" were converted into a mixed hall ahead of the current academic year despite opposition from alumni and current members of the hall.-graphic