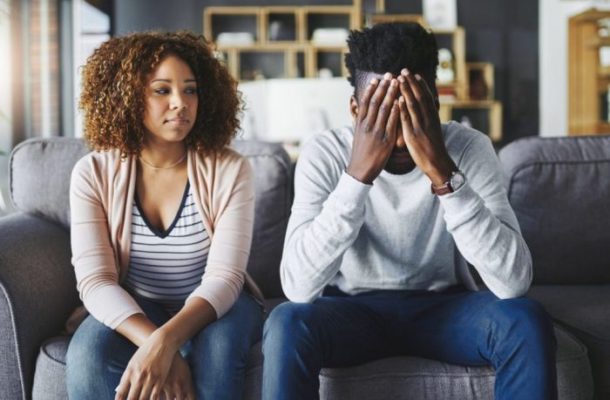 Men don’t like admitting things. Sometimes this manifests in adorably clichéd ways — they won’t admit that they’re lost, they won’t ask for help at the hardware store... you know, the normal “stubborn man” sitcom stereotypes.

But sometimes, male denial can have extremely serious consequences, especially when it comes to depression.

Depression can be a seriously painful disorder for both men and women, but men often have a much harder time admitting they’re depressed. Why? Because men don’t have the social structures that encourage them to openly discuss their feelings with other men.

The signs of depression in men include internalizing how they're feeling. They deny it, so the depression goes untreated and ends up manifesting in different ways.

But it’s still important that we recognize how to identify when men are experiencing depression, particularly because, according to the American Foundation for Suicide Prevention, men die by suicide almost four times more than women. And depression is a major reason why.

If you suspect at a man in your life might be suffering in silence, here are seven signs of depression that show he may need some support and help.

1. They keep having unexplainable aches and pains.


Physical discomfort can one of the biggest signs of depression in men. It can manifest as headaches, stomach pains, back or joint soreness — it can take many different forms.

Many men are hesitant to admit that they’re sick or suffering, but men, as a whole, are way more uncomfortable admitting to emotional pain, so those physical symptoms can actually be great red flags for helping your man recognize that something isn’t right.

2. They seem to feel neutral about everything.


How often does your man say, “I don’t care”? Is it hard for him to get excited about anything? Does he shrug off everything, never expressing an opinion about anything?

When men are depressed, they can sometimes find it very hard to give a damn about anything in their lives, and that kind of extreme apathy goes hand-in-hand with depression.

3. They stop doing the things they love.


When men are depressed, it mutes all of their emotions, particularly feelings of happiness or joy. That’s why depressed men often pull away from activities that they used to love.

If your man won’t go out with his friends anymore, abandons his hobbies, or doesn’t seem interested in the things he used to be passionate about, he might be depressed.

So what do they do? They get angry. They lash out. They become surly and aggressive. They become like a lion with a thorn in its paw — they’re hurt, scared, and don’t know what to do about it.

The only response that seems to make sense is rage. It can make the people around them miserable, but it should be recognized as a cry for help more than anything.


This can be a difficult symptom to discuss with a man, because you don’t want to pile sexual embarrassment on top of their feelings of depression. But a noted decrease in sexual desire and performance can be a big sign that your man is experiencing depression.

There are other medical reasons why your man might be experiencing sexual dysfunction. It doesn’t hurt to have them checked out by their primary care physician, but depression can cause a waning libido in men, so it’s worth having the conversation with them, even if it’s an awkward one.

6. They sleep all the time.


If your guy is working two jobs or keeps pulling night shifts, it might be understandable if he's always tired. But if your once-active man seems to find any opportunity to take a nap, he could be depressed.

Excessive sleep is a form of self-medicating for depression. When just being conscious causes someone so much pain, they try to find any excuse to lapse into a deep sleep. If it seems like your man never wants to get out of bed, you might want to start talking to him about depression.


Being depressed sucks, and it warps the way you view the world. One way that men process depression is that it can fill them with a pervasive sense of pessimism. Everything is the worst, we’re all doomed, why ever try because nothing is going to work out anyway.

If your man can find the dark lining of any cloud, that might be a big indication that something inside of him isn’t letting him tap into his positive emotions at the moment and he might need help.

As we’ve mentioned, depression is an extremely serious condition for both men and women, but men often have a harder time admitting they’re experiencing it. If you think the man in your life is struggling, have the hard conversations with them and encourage them to seek out professional help.

It's also good to try to get him back into healthy routines, like exercise and seeing friends. Eating healthy and going outside more can help, too. Let him know that it's not weak to need help or even medication when you're depressed.

In fact, asking for what you need (when you need it) is a sign of strength. It's a conversation that might save his life.