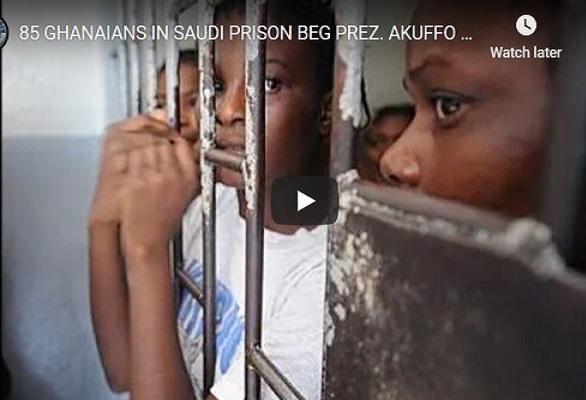 About 85 Ghanaians including a pregnant woman have been arrested in Saudi Arabia over illegal documentation.

The group has been kept in the Jeddah prison for weeks.

“We were arrested for not having legal documents to live and work here in Saudi Arabia,” one of the captives said.

In a distress call to crime prevention and advocacy organization, Crime Check Foundation, one of the prisoners, 35-year-old Rose said they have been shuttling between the prison and the Jeddah airport since their arrest.

“A week after the Saudi government arrested us for not having a permit to live in this country, they prepared us for deportation”.

The frantic group enquired about the shuttle with the Saudi officials and the response left them to their fate.

“We were told Ethiopia Airlines has refused to take us; the reason can be best explained by them” she added.

In the heat of coronavirus restrictions and protocols, the government of Ghana through the Ministry of Foreign Affairs on May 20, 2020, airlifted stranded Ghanaians in Saudi Arabia, the US, the UK, and Dubai.

“Officials at Ethiopia airlines told us that during the border closure, they airlifted some Ghanaians to Ghana but the airline had to bear the COVID_19 test fees of eight of them at the airport because they refused to pay.

“They said until the Government of Ghana writes requesting the airline to airlift us, they are not going to take us on board “devastated Rose narrated.

All efforts to get the airline to take them on board has failed.

According to Rose, all 85 of them are willing to pay the $150 charge but the airline has been adamant about their request.

Theghanareport sources at the  Ghana Airport Company indicates that all airlines are to ensure that passengers on board to Ghana pay their COVID_19 charges online before departure, failure to do that attracts a $3500 fine on each passenger.

A fine to be borne by the airline.

“The first time they took us to the Jeddah Airport, I collected the monies from some members, I am holding it right now, we are ready to pay the charge so we plead with the government of Ghana to come and rescue us”

Living condition in Jeddah prison is not the best as the group is made to sleep on metal slabs.

“The food is not good but our sleeping condition is worse, we sleep on metal slabs that are normally used in secondary schools” 26-year-old, Salamatu said.

She has lived in Saudi Arabia for four years in search of greener pasture but luck ran out on her.

” I came here four years ago in search of greener pasture, I wanted a good life for myself”

“There is a pregnant woman here, she is due in two weeks, and about nine of us are critically sick, one lady nearly died last night, the prison wardens here wait till the sickness gets severe before they take us to the hospital,” a distressed member of the group said.

“We are pleading with the government of Ghana to have mercy on us” 35-year-old, Fatima Mumuni added.

In July 2020, the government of Ghana evacuated some 83 businessmen who were stranded in South Korea.

Response from the Ministry of Foreign Affairs

Theghanareport‘s sources at the Ministry of Foreign Affairs confirmed the number but could not ascertain the gender breakdown of the group.

He said the government of Ghana had arranged with Ethiopia Airlines to airlift the group to Ghana.

” The ministry has plans to bring the people back to Ghana, in fact, we have finalized everything with the airline, it is left with them (Ethiopia Airline) to give us a date for their evacuation…they will be here before the due date for the pregnant woman” he added.

According to him, “Ghana will bear the cost of their COVID_19 test charges and the Saudi government will handle the evacuation”.