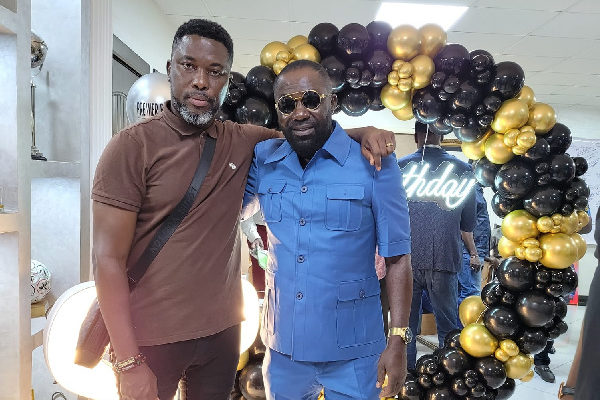 A Plus and Osei Kwame Despite

Kwame A Plus, a media personality and one-time musician, on May 5, 2022, posted a photo of himself and business mogul, Osei Kwame Despite on social media.

As is usually the case, his teeming followers on Facebook reacted and commented variously on the photo which A Plus simply captioned, “Despite,” with two emojis.

Twenty-four hours later, he revealed a portion of the content of the exchange he had with the businessman who owns the Despite Group of Companies.

He wrote in a May 6 post how Despite warmly welcomed him and thanked him for his Saturday night appearances on the United Showbiz programme, that airs on UTV – a channel under the Despite Media Group.

A Plus wrote: “Yesterday, when Despite saw me, he got up from his seat, hugged me and said, thank you for everything you have done for UTV.”

Then he continued by throwing a jibe at his detractors: “By this time somebody too is busy commenting under UTV's post, "don't bring A Plus to the show again." "Because of A Plus I won't watch the show." Sia!! Go and watch animal kingdom.”

Then he left his followers with some advice: “When you pray, pray for grace. Pray for favor. And learn how to wash your hands if you want to bambam with the big boys.”

A Plus along with Arnold Asamoah-Baidoo have been regular guests on the United Showbiz programme originally hosted by Nana Ama MacBrown.

Since the start of this year, the main host has ceded her seat to a medley of showbiz industry players form actors to musicians to presenters. It is not known as yet when she will be resuming her seat on the widely-watched Saturday evening programme.

Yes!! Kwame A Plus is still that homeless guy who was mostly seen around Mccarthy Hills-Mangoline area in the early 2000s. It's either you are motivated or it makes you angry